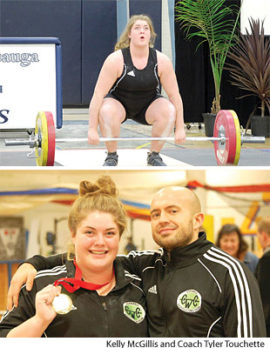 
Cornwall Ontario – Despite heading to the Ontario Senior (all ages) Weightlifting Championship with one Youth and one Masters aged lifter, the Cornwall Weightlifting Club continued to impress.

Kelly McGillis, 16, upgraded from the silver medal she won at last year’s championship, taking the gold medal in the women’s +75 kg weight class.

McGillis (pictured) snatched 80 kg (176 lbs.) and clean and jerked 102 kg (224.4 lbs.) for a 182 kg total. This qualified her for the upcoming Canadian Senior Championships in Edmonton this June and the Pan-American Youth Championships in Mexico in September.

CWC’s other representative was Thorin Gault, who finished seventh in what was the deepest weight class of the competition — the men’s -94 kg class.

Gault will have a better chance at a medal lifting against athletes his own age at the upcoming Canadian Masters Championship on April 27 in Toronto. He will also be travelling to Torino, Italy for the World Masters Games in August.

Both lifters were coached by Cornwall Weightlifting Club (CWC) head coach Tyler Touchette who has been instrumental in the recent growth of the sport of Olympic style weightlifting in both Cornwall and province.

CWC is looking for both youth and adult weightlifters to join the team.