Success is in our blood 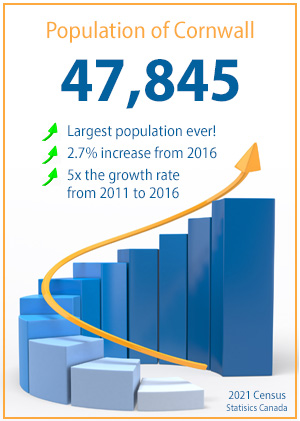 For over 150 years, companies have succeeded in Cornwall because of the people that live here. A strong work ethic is deeply ingrained in the local culture that quite simply makes for a productive, efficient and extremely loyal work force. Some companies have marvelled at turnover rates low enough to turn heads in their respective industries, while other companies are routinely handed projects because their Cornwall operation has proven an ability to get the job done.

Cornwall’s population has remained relatively stable over the past decade, despite strong trends for people to migrate to larger urban centres. The City itself has a population of approximately 47,845 (2021 Census), while the surrounding region has grown to over 114,000. Current unemployment levels sit at or slightly below national and provincial levels.

Labour costs are often one of the largest contributors to overall business costs. When taking all benefits into account and adjusting for productivity differences, Canada ranks as one of the leading countries in the world for providing a cost effective workforce. Cornwall itself has lower overall labour costs than many Ontario cities, due in no small part to the overall lower cost of living in the area.

One of the unique aspects of Cornwall’s workforce is its bilingual capabilities. The most recent census indicates nearly half of the local residents have knowledge of both English and French — that’s more than four times the Ontario average. If you need to do business in English, in French, or in both languages, you’ll be hard-pressed to find a better workforce anywhere in North America.

Combining the unique bilingual nature of the workforce with its strong work ethic, loyalty and overall lower costs, Cornwall’s demographics makes a strong argument to locate in the region.

There are a wide variety of employment opportunities in Cornwall and the region at any given time.

More detailed demographic information is available via the following two documents from our Resources page:

The 2021 Census is the most accurate survey of Cornwall’s population, with more information to be released as Statistics Canada processes the results of the census. The latest Census Data can be accessed here: