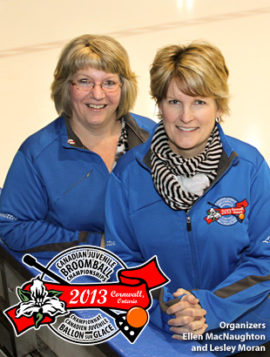 
Cornwall Ontario – The eyes of Canada’s broomball communities will be on Cornwall from April 3rd to 6th, 2013.

Cornwall’s Benson Centre will play host to the 2013 edition of the Juvenile National Broomball Championships.  Players are between the ages of 15 and 19.

““The last time a Juvenile Broomball National Championship was held in Cornwall was in 1995,” said Ellen MacNaughton, one of the organizers. “Our committee is very excited to showcase Cornwall’s brand new Benson Centre to the rest of the country. All of our venues for this Championship are first class and we think our visiting teams will be very satisfied with all that Cornwall has to offer.”

Eastern Ontario, a hotbed for broomball in Canada, is sending four teams to the tournament.  Eastern Thunder and Sting are attending as the defending champs in the girls and boys divisions respectively.  Seaway Valley Devils and Valley Gamblers have been invited by the host committee to be the “host teams” in each division.

Saskatchewan is sending two teams in each division, Manitoba one in each, Quebec three in each and Ontario is sending an additional two in each.  In all there will be twenty teams, ten girls and ten boys, competing.

“We are expecting over 600 people to be in town for the tournament,” says Ms. McNaughton. “On Wednesday night when we have the four local teams playing each other on either side of the Opening Ceremonies (7:30 pm) we are expecting the stands to be over flowing. Throughout the week, I would not be surprised if over 1,000 people come through the doors.”

Semi finals take place on Friday afternoon and the finals are slated for Saturday.  In all there will be sixty eight games of broomball played over the four days.

The Awards Banquet is being held at the Cornwall Civic Complex, Salons A,B,C on Friday, April 5th at 7:00 pm.

The host committee is looking for volunteers to help run the clocks on both ice surfaces as well as manning the admission doors.

There is also a website set up with details about the championship www.2013juvenilebroomballnationals.com The week of the tournament live stats can be viewed at www.broomball.ca