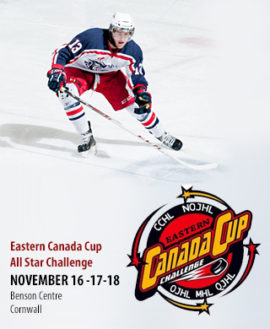 Fans will see nine elite all-star teams compete over three days in a unique format.  Games consist of two twenty-minute halves, creating an urgent and intense game from the drop of the puck.

The Cornwall Colts will be well represented on the CCHL Robinson Division Team. Forwards Grant Cooper, Nick Lalonde and Tanner Spink, as well as defenceman Ross Craig, will suit up for the team that is also made of six players from the top ranked Carleton Place Canadians. The Kemptville 73’s and Smiths Falls Bears are each represented by four players, with one player each from the Brockville Braves and Hawkesbury Hawks rounding out the roster.

“These players earned their spots in this tournament by what they bring to the rink every night,” said Cornwall Colts Head Coach Ian MacInnis who will coach the All-Star team. “It’s a good event for scouts and recruiters.”

MacInnis will be joined behind the bench by Smiths Falls coach Mark Grady and Hawkesbury’s Rick Dorval.

The event serves as a scouting opportunity for NHL, NCAA, CIS and CHL programs and annually attracts over 100 organizations.  It also allows for the staff of Team Canada East to have a final view of many eligible players to participate in the World Junior A Challenge, which this year is being held in Ontario for the first time.

Six teams are in action in three games tonight starting at 6pm at the Benson Centre.  Action continues throughout the day on Tuesday. The championship game is Wednesday evening at 7:30pm.

Daily passes/tickets will be available at the door.

About the Canadian Junior Hockey League

The Canadian Junior Hockey League is a national organization comprised of all 10 Junior A hockey leagues in Canada.  The CJHL represents 131 teams and more than 2,900 players.

The CJHL is a proud partner of Hockey Canada and is the only approved Junior A league in Canada.  Each year CJHL players compete for the RBC National Junior A Championship and represent Canada internationally at the World Junior A Challenge.