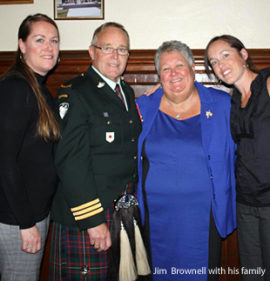 
Cornwall Ontario – Jim Brownell has been named the Honourary Lieutenant Colonel of the Stormont, Dundas and Glengarry Highlanders Regiment. The long time community leader and former MPP succeeds Hon. Lt-Col. Robert Brooks, who is being promoted to Hon. Colonel with the retirement of Sean Murray.

The change of honourees took place April 4 at the Cornwall Armoury. Local resident John Earle attended the ceremony, and he shares the experience here:

My friend Jim, Hon. Lieutenant-Colonel to the Glens

I’ve had the privilege to be invited to many events in my life, but last Thursday evening was the first time I was ever invited to watch the appointment of 2 men, as honourary Colonel and Lieutenant-Colonel to the Glengarry Highlanders at the Armouries in Cornwall. Truth be told, I’ve never been to any military ceremony, so I was very excited to be invited to one honouring someone I hold in such high regard.

I received the invitations from friend and former MPP Jim Brownell who was being appointed as the new honourary Lt. Colonel.

Arriving early at the Armouries, I got a different feeling walking into the high-ceilinged, cold brick castle on Fourth street east. I’ve attended many events at the Armouries, yet somehow this was different. No one had hung draperies to hide the military aspects of the building; in fact they brought out large artillery, and hung camouflage netting. There was no music playing in the background to try and soften the air. The chairs were lined up in rows so straight it was as if a giant hand had come down out of the sky and drew a line with a ruler and placed them in perfect order.

As I made my way in I was greeted by an old high-school class mate who is an airman in Petawawa. Dressed in his blue uniform, he welcomed me to the facility and we quickly caught up on the past 20 odd years. There were many people there from our community, as well as dignitaries from all over Canada, all there to celebrate the appointment of these two men, as well the end of the term of the exiting honourary Colonel.

The ceremony commenced as per the scheduled time. This I had expected. Officers entered and lined the regiment up, in ascending order of rank. At first I wondered if each and every new officer who came in before the Colonel would go through the same motions and then it hit me. I could see something as each new officer came in, and the lines of Glens would shuffle around, and walk in perfect invisible lines. Each and every one was brimming with pride. They were proud of their commitment to serve our country. Proud to be part of the Glens and proud to be a part of the swearing in of their new honourary Lt. Colonel and Colonel. I have to admit I was choked up. Here’s a group of people who have chosen to defend me, my family, and my home. They have chosen to appoint Robert Brooks as their honourary Colonel, and Jim Brownell as hon. Lt. Colonel. This wasn’t just a celebration of these two men; it was a celebration of our community.

Sir Robert Borden, our eighth Prime Minister, once described appointing Honoraries as “of greatest advantage to the Militia to be able to enlist the interest and sympathy of gentleman of position and wealth by connecting them to Regiments.”

Their roles as honourary Colonel and Lt. Colonel are not only to promote the regiment locally and abroad, but as well to advise the Colonel of the regiment on all issues excluding operations. They are there to bring their experience and wisdom to the men and women who fight for us each and every day.

Jim I know you will serve your time as honourary Lt. Colonel of the Glens with the same vigour and conviction you did as our M.P.P. I am proud of you and very honoured to call you my friend.

About the Stormont, Dundas and Glengarry Highlanders

The Stormont, Dundas and Glengarry Highlanders is a primary reserve infantry regiment of the Canadian Forces. They have served in the War of 1812, the Great War and World War II. Known around the world as “The Glens”, the regiment’s motto is Dileas Gu Bas (Faithful unto death). The regimental headquarters is located in the Cornwall Armouries at 505 Fourth Street East, Cornwall.