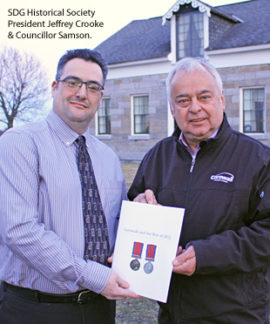 New Book Highlights Cornwall and the War of 1812


Cornwall Ontario – An important chapter in Cornwall’s history has been brought to life through the publication of a new booklet by the Cornwall Community Museum.

Cornwall and the War of 1812 takes readers on a journey back in time by providing an illustrated history of the role of Cornwall and its people in this pivotal conflict in Canadian history.

The booklet discusses the occupation and evacuation of Cornwall, the weapons used during the conflict and some of the local personalities who were in the spotlight during the War.

“The book is based on first-hand accounts,” said Ian Bowering, Curator of the Cornwall Community Museum.

Mr. Bowering gave credit to Katelyn Beaudette, a summer student at the Museum last year, for helping to bring the booklet to completion. In addition to historical accounts, the booklet also features a variety of photographs, prints and maps from the SD & G Historical Society archives and collection at the Museum.

The booklet was officially launched during a gathering at the Cornwall Community Museum on Thursday, March 28th.

Speaking on behalf of the City of Cornwall at the launch, Councillor Gerald Samson said it was nice to have an official publication to mark Cornwall’s involvement in the War of 1812. He also thanked the Museum for its continued efforts to promote local history.

For a brief historical snapshot of the role Cornwall and its people played during the War of 1812, please click here.