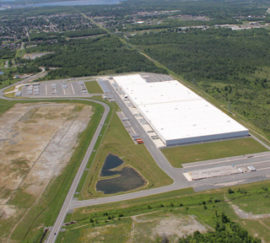 
Cornwall Ontario – Walmart Canada has announced that it has reached agreement to purchase the former Target Distribution Centre in Cornwall. The company has stated that the distribution centre will generate 1000 jobs in Cornwall.

The announcement included plans across Canada to acquire 12 store leases and one owned property formerly held by Target Canada,  for an aggregate of approximately $165m. The transactions are subject to the approval of the court in accordance with Target Canada’s Companies’ Creditors Arrangement Act proceedings and certain other customary conditions.

“Walmart is committed to the Canadian market, and this agreement helps us accelerate our growth plans ensuring more Canadians have access to our low prices,” said Dirk Van den Berghe, President and CEO of Walmart Canada.

“The 13 stores acquired are well situated, and we are excited to bring Walmart’s successful Supercentre offer to customers in these markets. We have served millions of loyal customers, and look forward to continuing to serve them through our stores and growing e-commerce business.”

The Eleven Points Distribution Centre was built by Target Canada in 2013 to service its stores in Canada. Target announced its plans to leave the Canadian market in December 2014, and the distribution centre has been vacant since early spring.

“The building is an excellent modern facility that is strategically located along Highway 401 in the Cornwall Business Park,” said Mark Boileau, Manager of Cornwall Economic Development. “This acquisition should prove to be an asset to Walmart Canada’s continued growth in Canada.”

Walmart expects to invest a further approximately $185m to renovate the distribution centre and 13 stores, bringing Walmart’s total investment to approximately $350m. Work on all locations is expected to start within the next few months subject to all necessary approvals.

Walmart plans to hire approximately 3,400 new associates in British Columbia, Manitoba, Ontario and Quebec and these projects are expected to generate approximately 1,500 trade and construction jobs.

The acquisition of these 13 retail locations, one distribution centre and the investment commitment of approximately $350m are in addition to the 29 Supercentre projects announced on February 11 of this year.   The previous announcement covered an investment of $340m for supercentres, expansion of our existing distribution network and e-commerce projects, bringing Walmart’s total investment to approximately $690m.

About Walmart Canada
Walmart Canada currently operates 395 stores nationwide, consisting of 282 supercentres and 113 discount stores serving more than 1.2 million customers each day. In addition to its stores, Walmart Canada’s e-commerce website — walmart.ca — is visited by more than 450,000 customers daily.  With more than 95,000 associates, Walmart Canada is one of the country’s largest employers and has been ranked one of Canada’s top 10 most influential brands four years in a row.  Walmart Canada’s philanthropy program is focused on helping Canadian families in need, and since 1994 Walmart has donated and raised more than $200 million to Canadian charities. Additional company information can be found online: