It came as both sides are celebrating 60 years of generating low-cost, clean and renewable hydropower on the St. Lawrence River. 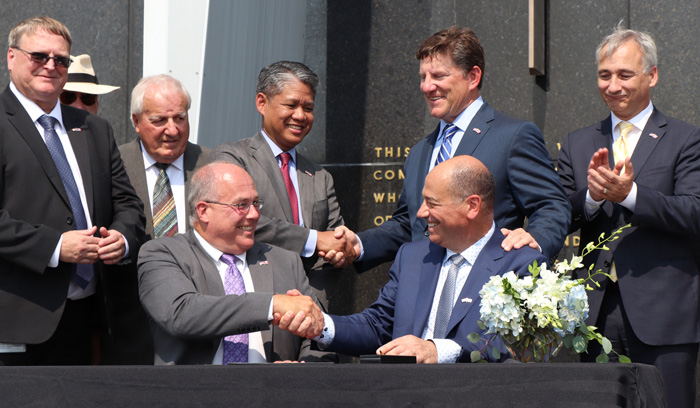 “The St. Lawrence Seaway and Power Project was a massive undertaking that transformed the river in the 1950s,” said Greg Rickford, Ontario Minister of Energy, Northern Development and Mines. “This magnificent dam that spans the border between Canada and the U.S. will ensure future generations of Ontarians will continue to benefit from low-cost, clean hydropower.”

Dignitaries gathered at the middle of the dam at the International Friendship Monument to renew the partnership commitment between the two countries. The monument was first unveiled in a ceremony attended by Queen Elizabeth and U.S. Vice President Richard Nixon on June 27, 1959 – about a year after power production began.

“Both the St. Lawrence Seaway and the Power Project presented great challenges for the engineering capabilities of the day.  It also had negative impacts on the lives of many area residents, including the Mohawks of Akwesasne” said Bernard Lord, OPG Board Chair. “Our company has been engaged in respectful dialogue with the First Nation for many years and both parties signed a Final Settlement Agreement on Oct. 2, 2008.  I want to recognize the excellent working relationship that we have enjoyed in recent years with the Mohawks of Akwesasne.”

“For decades, we have worked with our American counterparts to generate clean power from the St. Lawrence River in an environmentally and socially conscious manner,” said Jeff Lyash, OPG President and CEO. “I’m proud of the hard work by the women and men that worked at the station to keep it running safely and reliably over the last 60 years.”

Since the dam went into service, OPG and NYPA have worked closely under a Joint Works Agreement to not only share the St. Lawrence River, but also maintenance practices, safety experiences, and common operational costs and duties, all while producing power independently at two separate generating stations. Officials renewed the agreement for another 15 yearst to help ensure the continued flow of clean, renewable energy to both Ontario and New York State.

OPG generates safe, clean, reliable, low-cost power for Ontario. More than 99 per cent of this power is free of smog and greenhouse gas emissions. OPG’s power is priced 40 per cent lower than other generators, which helps moderate customer bills.