Cornwall Ontario – Hundreds of junior lacrosse players from across Canada are in Akwesasne and Cornwall this week to compete in the 2018 Founders Cup National Junior B Box Lacrosse Championship. 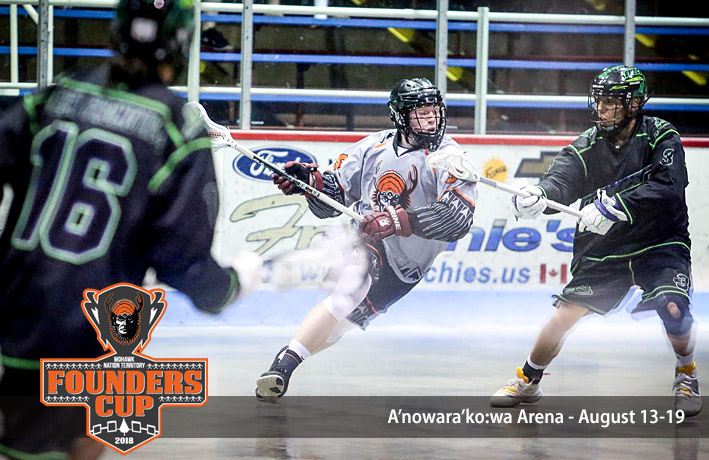 “Between the players, team officials and supporters, we’re expecting 1,000 people (for the tournament),” said Laurie Gardner, one of the tournament organizers.

All of the games will take place at the A’nowara’ko:wa Arena on Cornwall Island while the teams and supporters will be staying in Cornwall. During down time between games and practices, there will be plenty of opportunity for the participants to explore the area.

The tournament will feature 16- to 21-year-olds battling it out for the national title and fans can expect to be on the edge of their seats.

“It will be excellent lacrosse,” said Mrs. Gardner. “It’s a big deal for our community to host this event and an even bigger deal for our team that’s still young.”

Teams will begin arriving on Monday, with games starting on Tuesday and continuing through the week leading to the championship game on Saturday, August 18th.

The recently renovated A’nowara’ko:wa Arena, commonly known as the ‘Turtle Dome’, sits along the shores of the St-Lawrence River and last hosted the Founders’ Cup in 1998.

“It’s been 20 years since this tournament was held in Akwesasne and we’re going to make sure its return to our community is one of the best ever,” added Kariwate Mitchell, General Manager of the host Medicine Men.

The A’nowara’ko:wa Arena is a modern, multi-function sport and recreation facility overlooking the scenic beauty of the St. Lawrence River. The arena is located on Cornwall Island – Kawehnoke, Mohawk territory of Akwesasne,  just a few minutes south of Cornwall. The arena has seating capacity for 1700 along with standing room for 600.

About the Founders Cup

The competition for the Canadian National Junior “B” Championship was initiated by the Canadian Lacrosse Association in 1964. In 1972,  the Founder’s Trophy  was introduced to commemorate  the founders of organized lacrosse, particularly the contributions of Dr. George W. Beers who wrote the first rulebook in 1867 and was instrumental in organizing the National Lacrosse Association (predecessor to the CLA).

Ontario teams have won the Founder’s Trophy in each of the past seven years, including a team from Akwesasne in 2015.