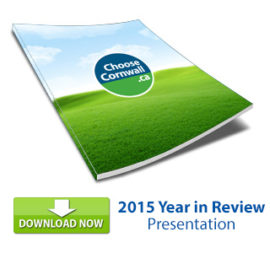 2015 Brings Another Year of Positive Growth

Cornwall Ontario – Cornwall’s economy recorded another positive year of growth, according to the 2015 Year in Review report issued by Cornwall Economic Development.

The report was delivered by Senior Development Officer Bob Peters to over 300 community and business leaders at a Team Cornwall event at Galaxy Cinemas. The presentation will be broadcast several times on TVCogeco Cornwall.

“The Year in Review gives us a chance to reflect on the collective successes of the past year and celebrate the many things that make our community such a great place to call home,” said Mayor Leslie O’Shaughnessy. “Cornwall is going through an exciting period of change. New restaurants and businesses are opening in the City’s commercial areas. Subdivisions are being built out in various corners of the community. The transformation of the Cotton Mill district is well on its way. These factors – together with many others – give us plenty of cause for optimism for 2016 and the years ahead.”

The Year in Review report recapped development, investments and achievements by businesses and individuals throughout the year. Here are some of the highlights:

The above is just a sampling of the dozens of stories referenced in the Year in Review report, which can be downloaded in the Resources section of this website.

“I always look forward to this event,” said Paul Desnoyers, a partner with Craig Keen Despatie and Markell. “It’s great to get a wrap-up of all the incredible things that happened in Cornwall over the past year. 2015 was another great year and 2016 promises to be even better!”

The report also outlines dozens of accomplishments, anniversaries and achievements by local individuals, such as the gold winning skills of world kickboxing champion, Emily Vallance.

“We hope that people will take away this information and spread the word that good things are happening in Cornwall,” said Peter Gault, Chair of Team Cornwall.