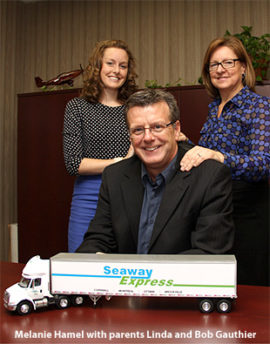 Seaway Express was founded in May 1990 by Bob and Linda Gauthier with a 5-ton truck and a goal to provide reliable and efficient overnight transport service between Eastern Ontario and Quebec.

Today, the company now has a fleet of 25 trucks, employs 55 people and operates a number of warehouse and cross-dock facilties. Company founder Bob Gauthier attributes his success over the years to his team of dedicated drivers, dock workers, office staff and in-house mechanics.

“We have the same equipment and trucks as other companies,” says Mr. Gauthier, “What really sets us apart is the quality of our team. You get the best people in the business, treat them well and with respect and let them shine. I’m just the coach.”

Safety is one of Gauthier’s primary concerns and he strives to maintain his company’s enviable record.  In 1999, the Ontario Ministry of Transportation performed an audit and gave Seaway Express an “Excellent” rating with a score of 97%. The rating has remained unchanged to this date. It is one of just many remarkable achievements.

Over the years, Seaway has also increased its real estate footprint in the Cornwall Business Park. The company is currently managing 200,000 square feet of warehousing space – allowing for more opportunities to better service their customers.

In 2010, Melanie Hamel officially joined the company to work alongside her father. She was recently profiled in Today’s Trucking Magazine’s “20 under 40” feature, where she is a proud promoter of Cornwall’s business community.  Each Seaway Express truck carries a ChooseCornwall.ca sticker on the back.

“I believe it’s important to support the community in which you and your colleagues live,” says Ms. Hamel.

Cornwall’s continuing growth as a distribution hub for Central and Eastern Canada bodes well for the next 25 years. As a local 3PL company, Seaway Express can help companies avoid inconvenient appointments at the big distribution centres in the area. Companies can leave their freight with Seaway Express,  knowing that the goods will get to their destination on-time.

Still, running a successful business is something that you can never take for granted. Melanie and her father Bob continue to work with their staff to secure new busines and keep existing customers happy.

“Being able to communicate clearly and concisely is extremely important; and that includes listening to what people are concerned about,” says Ms. Hamel.

Seaway Express has been recognized a number of times by its peers for business excellence. These awards include: