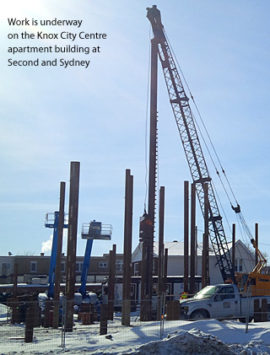 Construction Activity Continues At A Healthy Pace in January


Cornwall Ontario – Despite a very cold start to the year, Cornwall experienced a healthy dose of construction activity in January, with 37 building permits being issued with a total construction value of $12.8 million.

The January totals include building permits for 38 new family units – two semis and 36 units in the seven-storey Knox City Centre apartment building that’s currently under construction at the corner of Second and Sydney Streets . The project has a construction value of nearly $8.8 million.

Other large building permits issued in January include renovations to the Ontario Power Generation administration building near the RH Saunders Generating Station ($3.25 million) and interior renovations at the Weave Shed in the Cotton Mills District ($200,000).

“We’ve experienced a jump in building permit activity over the past few years, and we expect this uptick to continue in 2014,” said Chris Rogers, Chief Building Official.

There are a number of projects planned for later this year that will add to the 2014 building permit totals, most notably in commercial retail and residential sectors.

You can download a copy of the Year in Review report in the Resources section of this website.