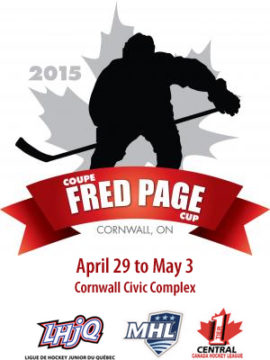 
Cornwall Ontario – The hockey spotlight will be shining on Cornwall this week as the City plays host to one of Canada’s biggest junior hockey tournaments, the 2015 Fred Page Cup.

The five-day tournament will see the host Cornwall Colts battle it out with the champions of the Jr. A hockey leagues from Eastern Ontario, Quebec and the Maritimes. At stake is the eastern Canadian hockey championship and a chance to move on to the RBC Cup national championship later in May.

The Colts’ opponents in the tournament include one familiar foe, the Carleton Place Canadians of the Central Canada Hockey League (CCHL), as well as the Dieppe Commandos of the Maritime Hockey League (MHL) and the Collège Français de Longueuil of the Ligue de Hockey Junior du Québec.

It’s familiar territory for the Colts – this marks the franchise’s seventh appearance at the Fred Page Cup tournament. The Colts hosted the tournament once before, in 2003. In 2000, Cornwall won the tournament and advanced to the RBC Cup in Fort McMurray, Alberta.

“Cornwall is a city with a rich hockey history and the 2015 Fred Page Cup represents the next chapter in our great hockey story,” said Mayor Leslie O’Shaughnessy. “Hockey fans are in for a real treat.”

The tournament got off to an unofficial start on Tuesday night with an alumni game featuring past greats from the Cornwall Royals and the Cornwall Colts. Over 1,000 spectators filed in to the Ed Lumley Arena at the Civic Complex to get a look at their past hockey heroes.

The Fred Page Cup will feature a round-robin format with games on Wednesday, Thursday and Friday at 3 pm and 7 pm. The Colts, as the hometown team, will play in the 7 pm slot on all three days.

Following the round-robin portion of the tournament, there will be a semi-final game on Saturday at 3 pm. The top two teams will then battle it out for the championship on Sunday at 3 pm.

Individual game tickets are available at the Civic Complex Box Office prior to each game. Tickets are $17 for adults, $13.50 for students and seniors and $9 for children 12 and under.

For more details on the tournament, please visit www.fredpagecup.com.

About the Fred Page Cup

The first Fred Page Cup was awarded in 1995. The trophy was donated by the Quebec Provincial Junior A Hockey League to create an Eastern Canadian Championship in honour of past Canadian Amateur Hockey Association President Fred Page. The 1995 Championship marked the first time teams outside of the Maritime provinces were allowed to compete for the Eastern Canadian Championship for a berth to the National Championship (RBC Cup). Today the teams represented in the Fred Page Cup are the Maritime Hockey League Champions (Kent Cup), the Ligue de Hockey Junior AAA du Québec Champions (Napa Cup), the Ottawa District champions of the Central Canada Hockey League (Bogart-Nielsen Cup), and a host team chosen by commitee 2 years before the tournament.