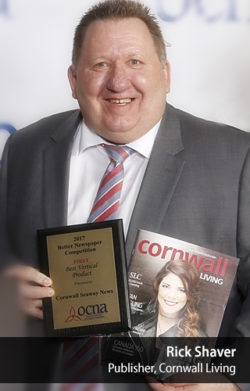 The 2017 Edition was won First Place in the Vertical Product category, beating out 41 other entries. The award recognizes the use of existing staff, current and new advertisers, expanded business opportunities, potential as revenue generator, quality editorial mix, and value to community.

“Diverse topics, photos were very good quality and worked well with the content,” noted Sophie Ryan, who judged the category. “It’s obvious these are well planned and challenging publications … with a common thread engaging with heart to the local communities.”

Cornwall Living is published by the Seaway News under the watchful eye of Rick Shaver. The Creative Director responsible for the look of the magazine is Colleen Parette.

“Cornwall and region is a great place to live and we have tried to capture that in our magazine” says Rick Shaver, General Manager of TC Media, the publishers of the magazine. “The magazine is three times the size of what it was 10 years ago. That speaks to the ever-growing number of success stories from people who live here.”

The 2015 edition of Cornwall Living magazine received a similar award, when it was named the best special publication with a circulation over 10,000.

The 2017 edition of Cornwall Living featured singer songwriter Melanie Brulée on the cover.

“I love what Choose Cornwall and Cornwall Living magazine has done to uplift the community,” says Ms. Brulée. “I’m proud to say I was born and raised in Cornwall and to be featured on the cover is a mega-honour!”

You can click on the following link to view the 2017 Cornwall Living magazine online:

The 2018 edition of Cornwall Living is expected out at the end of May.

The Business Excellence Awards are an annual event that recognizes outstanding overall achievement from over 300 community newspapers in Ontario.