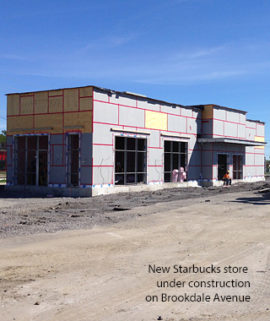 The annual Canadian Convention of the International Council of Shopping Centers (ICSC) is being held September 19-21 at the Metro Toronto Convention Centre. The conference attracts North America’s largest retailers and commercial developers.

The Cornwall Booth is number 1024.

“We are looking to engage retailers in taking a closer look at Cornwall,” said Bob Peters, Senior Development Officer. “There are a number of commercial retail development projects underway in the city right now, and we feel there are opportunities for companies to become more active in our market.”

This represents the 3rd consectutive year that Cornwall has exhibited at ICSC Toronto, and it has attended other ICSC events over the past several years.

Cornwall Economic Development has produced a brochure entitled Commercial Retail in Cornwall, which provides demographic information on Cornwall’s retail trade area, which includes Stormont Dundas and Glengarry.  The ChooseCornwall.ca website has also been expanded to include information on commercial real estate opportunities, including available retail properties in the Downtown and Le Village districts. Other information, such as downloadable maps, is available in the Resources section.

A vibrant retail and restaurant sector is seen to help in the attraction of new residents to Cornwall and at the same time maximize the positive impact of consumer spending in the local economy.