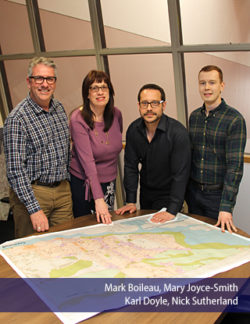 The Ontario Ministry of Municipal Affairs has approved the City of Cornwall’s Official Plan which helps guide development and growth in Cornwall for the next 20 years and beyond.

The Ministry approval represents the final step in the creation of the new Official Plan following a thorough review and consultation exercise with key stakeholders and the community-at-large.

“The Official Plan is a key document for the City,” said Mayor Leslie O’Shaughnessy. “It sets the path for the future of Cornwall and our vision of becoming a more liveable and sustainable community as we grow.”

Some of the key highlights in the new Official Plan include:

“The Official Plan creates the framework for land use in the City for the next 20 years,” says Mary Joyce-Smith, Division Manager of Planning. “Together with the Zoning By-Law, the Official Plan helps guide property owners and developers as to the approved use of lands within the City.”

As part of the process, the Official Plan was updated to be consistent with the new Provincial Policy Statement – the province-wide statement on land use planning – as well as recent changes in the Planning Act through the Smart Growth for Our Communities Act, 2015.

The new Official Plan was unanimously adopted by City Council in late 2017.

To view a full copy of the Official Plan and the related schedules and appendixes, please visit the Planning section of the City website: