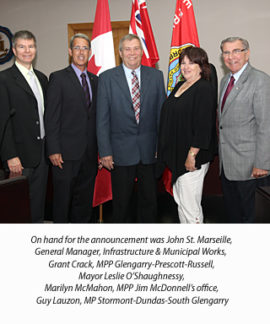 
Cornwall  Ontario – Residents of Cornwall will benefit an improved Marleau Avenue traffic corridor thanks to joint funding from the Governments of Canada and Ontario through the Small Communities Fund.

The Marleau Avenue Reconstruction Project involves redeveloping the urban roadway, from Marlborough Street to Alice Street, including reconfiguration of the Marleau – McConnell Avenue intersection. The new road will have expanded capacity and new features, including four traffic lanes, turning lanes, bike lanes in each direction, sidewalks on both sides and a median within high pedestrian activity areas.

“This project, which is the result of careful analysis and planning by City administration and Cornwall City Council, will help to address rapidly increasing traffic along Marleau Avenue and into the Cornwall Business Park, said Mayor Leslie O’Shaughnessy. “It will also help to make the entire area safer for vehicles, cyclists and pedestrians. The City of Cornwall is grateful for the financial contribution of the Government of Canada and the Province of Ontario through the Small Communities Fund.”

The project is slated to begin in 2016 following additional planning work and public consultation.

“We are pleased to invest in projects that will benefit our community by improving much needed local infrastructure.” Said Guy Lauzon, Member of Parliament for Stormont-Dundas-South Glengarry. “Our Government’s commitment to municipalities, big and small, has never been stronger. We are investing in priority infrastructure projects that have a strong impact on the quality of life of Ontario’s residents while helping job creation and economic growth.”

The Government of Canada and the Province of Ontario will each provide up to $833,000 for the project through the Small Communities Fund. The City of Cornwall will be responsible for all remaining costs of the project, which is estimated to cost approximately $2.5 million.

“Today’s investment promises to improve safety and traffic flow on one of Cornwall’s busiest arteries,” says Grant Crack, Member of Provincial Parliament for Glengarry-Prescott-Russell. “It’s part of the largest infrastructure investment in Ontario’s history – more than $130 billion over 10 years – which is supported by a number of initiatives, including unlocking the value of public assets to help make investments in transit, transportation and other priority infrastructure projects. It demonstrates our government’s commitment to keeping our communities strong, creating jobs and making sure that people get the basic services they pay for now and in the future.”

About the Small Communities Fund

The $1-billion Small Communities Fund provides funding for priority public infrastructure projects that deliver on local needs. Canada and Ontario will each provide $272 million to support projects in communities across the province with fewer than 100,000 residents. This funding will help address local priorities, supporting job creation and economic growth, thus sustaining a high quality of life in small communities across Ontario for years to come.

To learn more about the Government of Canada’s infrastructure programs, including the Small Communities Fund, please visit http://www.infrastructure.gc.ca/plan/nbcp-npcc-eng.html.