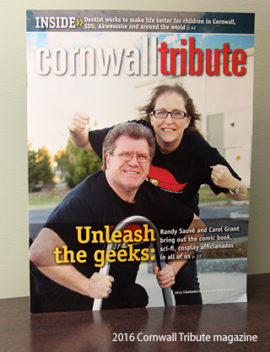 Cornwall Tribute Features the Softer Side of the City


Cornwall Ontario – Cornwall residents received a welcome surprise with their paper this morning, the new edition of Cornwall Tribute magazine.

The glossy lifestyle magazine features 48 pages of stories on the softer side of life in Cornwall and is published by local newspaper Standard-Freeholder. The 2016 edition marks the third year under the name Cornwall Tribute, although the publication can trace it roots back to the early 1990’s when the paper produced a large tabloid called the Progress Edition.

“Thematically, we’ve taken a slightly different approach to this magazine in 2016,” says Hugo Rodrigues, Managing Editor of the Standard-Freeholder. “We’ve gone out and found the helpers in our communities who make Cornwall, SDG and Akwesasne better places to live.”

The magazine features stories on arts and culture organizations, as well as sporting clubs. Alternative education is explored, as well as active transportation, conservation, nutrition and food safety. Volunteerism is a recurring theme in the magazine with feature stories on Cornwall’s 2016 Citizen of the Year Hermann Rogansky and philanthropist David Bloomfield.

“Cornwall is a great place,” says David Bloomfield, a local businessman who recently made a large donation to the Cornwall Community Hospital Foundation. “There are conscientious people that work hard.”

Randy Sauve and Carol Grant grace the cover of this year’s edition. The couple are the driving force behind CAPE, an event that has emerged as one of the area’s most popular events in just two short years. CAPE brings together thousands science fiction and fantasy fans in an exposition that features actors, writers and artists from popular TV shows, movies and comic books.

The magazine also includes a story that profiles the efforts of Dr. Rachel Navaneelan to help children in both her adopted home of Cornwall and her home country of Sri Lanka.

“I wanted to give back to the community,” says Dr. Navaneelan. “This community has been very good to me – this is my home now.”

Cornwall Tribute will have a total circulation of 14,000. Cornwall Economic Development will be distributing 1000 copies to people looking to move to the City.

“Cornwall Tribute continues to profile the best aspects of life in Cornwall, and this year’s edition features some of our unsung heroes – the volunteers who work behind the scenes,” said Bob Peters, Senior Development Officer with the City of Cornwall. “The magazine provides us with one more tool to use when marketing our community to potential new residents and investors.”