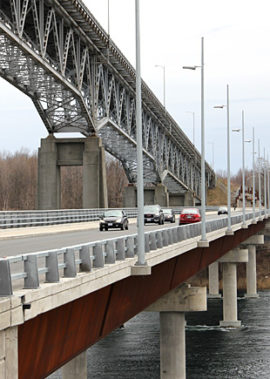 The contract involves the demolition of the decommissioned high level bridge. A new low-level bridge opened to traffic in January 2014.

The demolition of the decommissioned high level bridge will generally consist in removing the bridge deck, the steel superstructure, the concrete piers and abutments, except for Piers 3S (on Canal Lands)  and Piers 4S, 5S and 6S (in-water piers).

This demolition will allow for future construction of approach roadways from the city of Cornwall, the Canal Lands and Cornwall Island.

The Federal Bridge Corporation strongly believes that the opening of the new low level North Channel Bridge last January combined with the demolition of the decommissioned high level bridge will improve traffic flow for all and contribute in an increase in commercial traffic onto the new North Channel Bridge and the Seaway International Bridge as a whole.