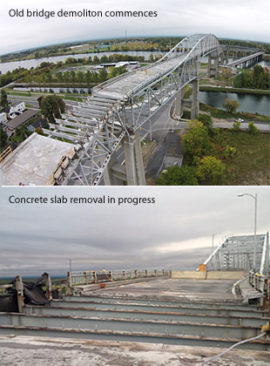 The American Bridge Canada Company will be doing the work on behalf of the Federal Bridge Corporation.

The high level North Channel Bridge of the Three Nations Bridge Crossing (also called the Seaway International Bridge)  spans  the north channel of the St. Lawrence River from Cornwall  to Cornwall Island. The bridge has formed a part of Cornwall skyline since its opening in 1962 and has reached the end of its useful life.

A new low-level bridge was built and opened earlier this year and has proven to be very popular with residents and visitors. Approximately 200,000 cars and 7,000 trucks use the new bridge each month.

The demolition is expected to continue until June 30, 2016. During the course of work, Brookdale Avenue from the traffic circle south to Water Street intersection may be subject to lane reductions and closures.  Advance notification of all lane and road closures will be provided to the travelling public.

The work to dismantle the bridge generally consists of the following activities:

Updates on the progress of work can be viewed at http://www.cornwallbridge.ca.