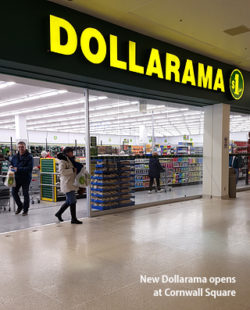 
Cornwall Ontario – Dollarama has opened its newest store at the Cornwall Square on Water Street.

“Our customers have been anxiously awaiting the store opening ever since it was first announced in September,” says Karen Burns, Retail Manager with Cornwall Square. “The increase in activity at the mall is already noticeable.”

With over 1000 locations across Canada, and 4 other locations in Cornwall, Dollarama is a popular discount retailer offering a broad assortment of everyday consumer products, general merchandise, and seasonal items.

Dollarama announced today that the average amount customers spent at its stores has increased, due to the introduction of new items for sale as well as a 7.8 per cent increase in the average checkout bill. The retailer plans to continue to open additional Canadian locations over the next several years.

Fashion retailer Labels will open a store offering clothing for men and women in 2017 as well.

Partners REIT is a growth-oriented real estate investment trust focused on the expansion and management of a portfolio of 36 retail and mixed-use community and neighbourhood shopping centres. These properties comprise a total of approximately 2.5 million square feet of leasable space.