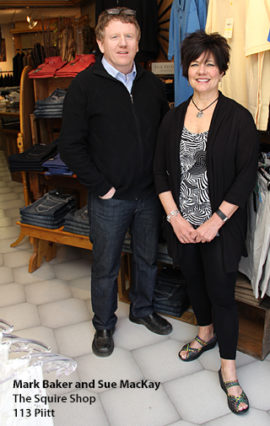 
Cornwall Ontario – One of Cornwall’s oldest merchants is returning to its roots.

The Squire Shop has relocated to 113 Pitt Street, and for owner Mark Baker, its a homecoming that is long overdue.

“My Dad started his career on Pitt Street when he was only 18 years old,” says Mark. “It’s exciting to come full circle and bring the store downtown.”

Stewart Baker started working at the S.W. Jacobs store on Pitt Street after a brief experience at Domtar taught the aspiring businessman that manufacturing was not the career he was destined for. He would soon move on to the iconic Dover’s Men’s Wear store at Pitt and Second.

In a few short years Mr. Baker would open his own store at Brookdale Mall in 1968. The Squire Shop offered fine men’s apparel and was one of the founding stores in the brand new mall, which at the time was Cornwall’s largest mall.

Mark would join his father in business in the early 1990’s, and watched as the Mall transformed from an indoor mall to an outdoor retail power centre. In fact, the Squire Shop was one of only three original retailers to remain at the site when the elder Mr. Baker passed away in 2007.

“The Brookdale Mall was a community focal point in its heyday, and a true gathering spot for many local residents,” recalls Mark. “One of the more special things about moving downtown is the ability to reconnect with the community and other local merchants.”

Mark and his long time associate Sue MacKay have already noticed a difference in the short time they have been open.

“The difference in foot traffic is obvious,” says Mark. “Downtown is a vibrant, happening space and we’re happy to add to the experience.”

The Squire Shop specializes in men’s and ladies apparel and accessories, carrying respected brand names such as North Face, Kuhl, Haggar and Columbia. The Shop is also known as the go-to place for eclectic items such as quality NHL team gear and authentic hand-made moccasins.

“We are expanding our line of ladies wear, and delighted to offer the new collections from Jessy and Smash,” says Mark.

Despite the changes in fashion and location, some things will remain the same. The Squire Shop will still offer quality men’s suits from S. Cohen and Jack Victor, as well as affordable suits for prom night.

“I could not be happier to be downtown,” says Mark. “It’s exciting to get up in the morning and come into work!”

The Squire Shop is open 6 days a week.  You can find them at: