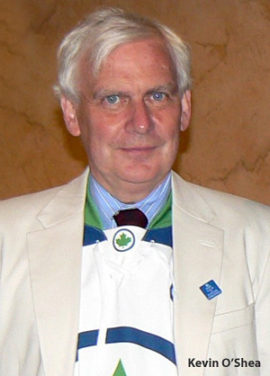 Enhancing Trade Between Cornwall and Massena


Cornwall Ontario – The amount of trade at the Cornwall port of entry is approximately equal to that between the USA and Bulgaria.

This little piece of information was offered up by Kevin O’Shea during a speech at a recent Team Cornwall meeting. Mr. O’Shea delivered an overview of theBeyond the Border action plan which included some interesting facts about the Canada-USA trade relationship, estimated to be worth over $1 trillion annually.

The scope and integrated nature of the world’s largest trade relationship is one key reason why both Canada and the United States are working together to strengthen perimeter security and economic competitiveness.  Prime Minister Harper and President Obama announced the creation of  two bi-national initiatives to realize these goals, and the Regulatory Cooperation Council and Beyond the Border Working Group. Both groups are working on actions plansdesigned to speed up legitimate trade and travel, improve security and economic competitiveness in North America, and align regulatory approaches between the two countries, where appropriate.

“These agreements represent the most significant steps since the signing of NAFTA,” said Mr. O’Shea, Assistant Secretary to the Privy Council’s  Border Implementation Team.  “It makes sense that given the integrated nature of our trade relationship that both countries work towards aligning regulations to encourage economic efficiencies.”

Over 100 people were in attendance, including Mayor Bob Kilger, who thanked Mr. O’Shea.

The Beyond the Border Action Plan includes 32 initiatives with clear performance measures, with the following key objectives:

The Regulatory Cooperation Council has 29 initiatives in its action plan, and seeks to address existing misalignment and “ongoing alignment mechanisms” in four key sectors: agriculture & food, health/consumer products, transport and the environment.

Mr. O’Shea outlined a number of ways that the Beyond the Border action plan will positively impact Cornwall.  These include:

“Cornwall is home to one of Canada’s most important border crossings, and it is encouraging to hear that work is in progress to make it easier for people to cross the border for both personal and business travel,” said Gilles Latour, Chair of Team Cornwall.

You can download a copy of Mr. O’Shea’s presentation by clicking here.

About Kevin O’Shea and the Privy Council

Kevin O’Shea joined the Border Implementation Team as Assistant Secretary in September 2012 after spending six years at the Embassy of Canada to the US as the Minister (Political Affairs) where he devoted much of this time to working on foreign, defence, border and security issues with US and Canadian agencies.

The Privy Council provides non-partisan, public service support to the Prime Minister and Cabinet and its decision-making structures. In today’s world of complex economic and social issues, much of this work involves consultation and coordination – both inside and beyond the federal government.

You can learn more about the Beyond the Border Action Plan here: