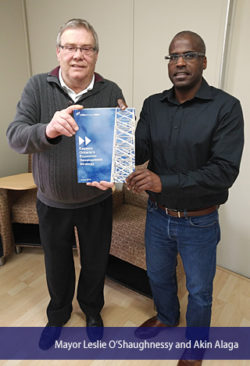 
Cornwall Ontario – A 2014 economic development strategy developed for Eastern Ontario will be refreshed, thanks to $135,000 in funding from the Province of Ontario.

Minister Jeff Leal, of the Ontario Ministry of Agriculture, Food and Rural Affairs, joined economic development partners from across eastern Ontario to make the announcement earlier this week. With Eastern Ontario being the first region in Ontario to undertake this endeavour as part of the province’s regional economic development planning process, the Ministry of Economic Development and Growth is providing the funding and any required project support.

The funding will advance the Eastern Ontario Leadership Council’s (EOLC) ongoing work, which includes three working groups which are responsible for implementation planning and priority setting, while engaging a broad cross-section of public and private sector stakeholders. They represent the three pillars of the strategy:

“The EOLC is a unique organization in Ontario, founded on the principle of promoting regional economic development in collaboration with the many municipalities and stakeholders across eastern Ontario, which represents about 1.2 million residents,” stated EOLC co-chair Leslie O’Shaughnessy, Mayor of the City of Cornwall. “We thank the province and Minister Leal for recognizing the EOLC’s work and providing funds to move forward in such a positive manner.”

The EOLC consists of five major partners that together represent the various sectors across the region:

The partnership was launched in 2015 following the release of the initial regional strategy, designed to tackle issues regarding the economic performance of the region and pursue opportunities to maintain and enhance its economic prosperity

The refresh of the 10-year Eastern Ontario Economic Development Strategy will reflect recent economic considerations and incorporate the EOLC’s existing regional work, while translating broad action steps into specific, prioritized projects to fulfil the 10-year vision. One major outcome is the creation of a comprehensive implementation plan, which will guide the EOLC’s work through 2024 and provide project development funding to the three working groups.

“As with any project of this magnitude, it is essential that the EOLC undertake a review and refresh of the existing strategy, including the collection and inclusion of relevant data, reports, and studies that have emerged since the release of the first version in 2014,” added co-chair John Fenik, warden of the County of Lanark. “Once the strategy is implemented, our region’s inclusive and collaborative economic development model will become a model for others.”