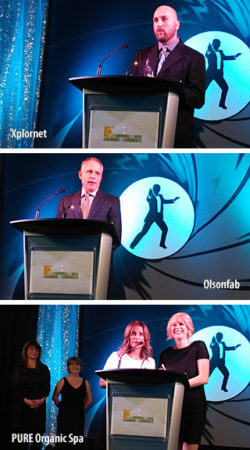 
Cornwall Ontario – Hundreds of community and business leaders gathered together this weekend for the 30th Annual Business Excellence Awards put on by the Cornwall Chamber of Commerce. The glittering affair was held at the NAV CENTRE.

The Business Excellence Awards recognizes and celebrates companies who have distinguished themselves by fostering growth, innovation, community service and excellence in their sectors. The winners are chosen by a committee of peers who evaluate nominations received  from the community.

Xplornet was honoured with the Economic Impact of the Year award. The communications company established a state-of-the-art operations centre in the historic Cotton Mill District, an investment worth $40 million that has created over 130 full time jobs.

Olsonfab was named Business of the Year. The metal fabrication company, led by Michael Ladouceur, is in the midst of a major expansion that will double its footprint in Cornwall.

The Small Business of the Year award went to PURE Organic Spa. Owners Michelle Longtin and Denise Robertson have expanded their downtown salon.

Blooms was selected as the Entrepreneur of the Year. Rachel Lamoureux has steadily grown her floral shop on Cumberland since opening 3 years ago.

Rick Shaver was honoured with the Lifetime Business Achievement Award. The publisher of the Seaway News and Cornwall Living magazine has been a leader in the business community for over 30 years, and has served on many community projects during that time.

The Historic Walking Tour was singled out for Tourism Excellence. The new project celebrates Cornwall’s heritage with over 30 plaques in the Downtown, Waterfront and Le Village districts.

The Cornwall Innovation Centre received the Breakthrough Award. The business accelerator group is currently working with 11 companies to grow their business.

Roy Nichol was named Team Cornwall Ambassador of the Year. The professional musician promotes Cornwall while on tour with April Wine, and through his collaborative work with other musicians.

Nolan Quinn of Dairy Queen was named Young Professional of the Year in recognition of his tireless support of community projects, most notably his work with the United Way.

The Above and Beyond award went to Dr. Thorin Gault for his continuing work in the community.

Lezlie Strasser, the organizing force behind so much of what the Chamber does, was honoured with a special service award at the gala in a surprise presentation by Chamber President Rory MacLennan.

And finally, Rachelle Lamond was named 2017 Citizen of the Year. A dedicated volunteer, Ms. Lamond has given selflessly of herself or over 25 years, working tirelessly to make a positive difference in the community.

Photos of the award winners can be found on the Choose Cornwall Facebook page at https://www.facebook.com/ChooseCornwall/