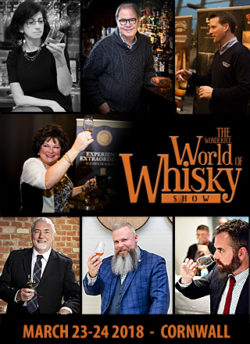 Experts Add Value to the Wonderful World of Whisky Experience


Cornwall Ontario – Over 500 whisky lovers are set to descend on the NAV CENTRE later this month for the sophomore edition of the Wonderful World of Whisky. The two day sold out event offers participants the opportunity to sample over 100 different kinds of whisky from around the world.

Yet it is the opportunity to meet and learn from some of the most recognized whisky experts that is building excitement for the 2018 event.

“The whole point of the show is to help people explore whisky and experience new tastes,” says organizer Ian Bentley. “And the best way to do that is with a guide that can share their knowledge of the craft of distilling one of the most celebrated spirits in the world.”

Here is the lineup of some of the whisky experts that will be in Cornwall for the show:

Known far and wide as The Whisky Lassie, Ms. McInnis is a freelance spirits writer, whisky panelist and judge who presents master classes in the UK well as North America. Passionate, enthusiastic and entertaining; she is a speaker in high demand worldwide.

Mr. Dekergommeaux is a sought after public speaker and award-winning author of Canadian Whisky: The New Portable and a regular contributor to Whisky Advocate and Whisky Magazine.  In 2016 The Globe and Mail named him one of the most influential Canadians in food and drink. Mr. Dekergommeaux is the founder and chairperson of the Canadian Whisky Awards, and publishes comprehensive notes about Canadian whiskies on canadianwhisky.org.

A member of the Caskers of Ottawa Whisky Club, Mr. Brisebois has served as a judge at the Canadian Whisky Awards. He is the North American Brand Ambassador for Bunnahabhain Islay Distillery, Deanston Distillery, and Tobermory Distillery.

Tish Harcus is the Brand Ambassador for Canadian Club whiskey and one of the few Canadians to ever win the international Whisky Icons award. In 2013 Tish developed the CC Women & Whisky program for women who are interested in knowing more or discovering whisky for the first time. Since its inception, she has traveled the world sharing her knowledge with women.

Frank Biskupek
A truer Scot there never was than Frank Biskupek, the Canadian Brand Ambassador of The Glenlivet. From his anecdotal approach to educating friends about whisky to the witticisms he employs to describe the complex flavour profiles of our whisky portfolio – he’s one of a kind.

Mr. MacKenney is a founding member and past president of the Saint John Whisky Tasting Society, and has been a presenter, writer and judge for the Canadian Whisky Awards. He has recently expanded his passions for spirits to the rum category as well.

A certified Scotch Whisky Ambassador, Mr. Millar is honoured to represent the Edrington Portfolio that includes such award winnings spirits as The Macallan, Highland Park, The Glenrothes, The Famous Grouse, Cutty Sark and Brugal Rum.

Andrew Ferguson
Known as the Scotch Guy, Mr. Ferguson owns the award-winning Kensington Wine Market in Calgary along with his own whisky tour company. He is viewed as one of Canada’s most trusted whisky experts and in 2011 was inducted into the Keepers of the Quaich, the first Canadian retail expert to be so honoured.

Emmett Hossack has been an avid whisky enthusiast since 2002. He is a member of four whisky clubs in Ottawa, the Companions of the Quaich in Vancouver as well as the Scotch Malt Whisky Society in Edinburgh. Emmett has tasted and scored over 3,000 whiskies on his website whiskeyscores.com.

Mr. Thompson is the brand ambassador for Forty Creek Whisky. He shares his love for for the Grimsby, Ontario-based brand known for its range of complex, yet approachable whiskies.

Mr. Girard is President of the Quebec Whisky Society and has served as a judge at the Canadian whisky awards and Canadian-International spirit challenge. His is co-president of Quebec Whisky.com.

Joining the above are several other respected experts and brand ambassadors.

“In addition to offering master classes and participating in panel discussions, all of our special guests will be on the main show floor, interacting with other attendees,” says Mr. Bentley. “Their presence has helped place Cornwall on the map in the whisky world.”

The 2018 Wonder World of Whisky show is not only longer than the inaugural event, it includes more activities including special dinners and tastings. The amount of available tickets were increased by 20%, yet the event still sold out in just a few weeks.

“We have guests attending from across Canada and USA, as well as a number of people from Europe,” notes Mr. Bentley. “In fact the vast majority of attendees are from outside of the region, which allows us to introduce them to Cornwall and Eastern Ontario.”