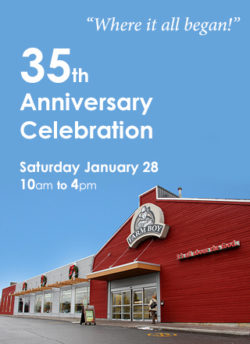 Three years later, Jean-Louis and his brother Normand Bellemare opened a new Farm Boy store at the current Cornwall location on Sydney Street. The larger store allowed for an expanded produce line and the addition of dairy, deli, cheese and meat product lines. An in-store bakery and bulk food line were added later.

The model of this successful Cornwall store would soon be introduced to consumers in Ottawa, who immediately embraced the warm and friendly stores that offered quality fresh produce, meat and bakery with top-shelf customer service. A third Bellemare, Daniel, joined his brothers in running the company.

Today, Farm Boy has grown to 23 stores across Ontario, employing more than 3,000 people. Loyal customers from across the province still love the Farm Boy signature farm-fresh produce, locally sourced foods, popular store brands and now enjoy some of the newer offerings found in store including wholesome fresh prepared meals, made from scratch in the Farm Boy Kitchen.

“Staying true to Farm Boy’s core values of offering quality and tasty fresh foods and friendly customer service has been a winning recipe for 35 years,” said Jeff York,Farm Boy co-CEO. “We are grateful for our loyal customers’ continued support and are dedicated to remaining attentive to their needs and preferences for many more years to come.”

Farm Boy’s commitment to offering local foods has also translated into tremendous success for a number of local, Ontario-based growers and producers like Smyth’s Orchard, Lanthier Bakery, Brandt Meats, St. Albert Cheese and others whose signature products have been mainstay on Farm Boy shelves.

This Saturday,  Farm Boy will host a 35th anniversary celebration in Cornwall Ontario, where it all began.

“Cornwall is proud to be the birthplace of Farm Boy,” said Mayor Leslie O’Shaughnessy, City of Cornwall. “We are happy to see the company, which has built its reputation on quality and service, continue to have success as it expands to other Ontario communities!“

As a thank you for their support for the past 35 years, Cornwall customers are invited to drop in for a celebration that will feature exclusive Cornwall Anniversary specials, tasty samples from local suppliers, face-painting and a chance for children to meet the Farm Boy mascots, Lulu the Cow and Farm Hand.

Customers will also have the opportunity to enter into a draw to win a $100 Farm Boy gift card.

With legions of loyal customers, Farm Boy has grown from a small produce stand starting in Cornwall in 1981 to 23 stores located in Brantford, Cambridge, Cornwall, Kingston, Kitchener, London, Ottawa, Pickering and Whitby. The company plans to continue its fresh market expansion across Ontario with more stores planned for 2017.