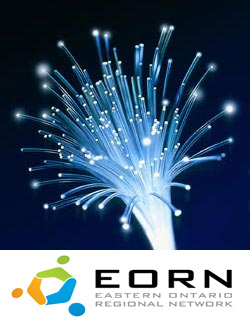 
Cornwall, Ontario – Residents in Cornwall and the United Counties of Stormont, Dundas and Glengarry are celebrating the news today that improved high-speed Internet service is now available in their area.

The reach and speed of existing wireless and DSL networks have been expanded to provide download speeds of up to 16 Mbps through new fibre optic and wireless connections, with new or improved access points made possible through the Eastern Ontario Regional Network (EORN) project.

“The work in the Stormont, Dundas and Glengarry zone is yet another example of how EORN has brought together different technologies to improve broadband access to as many residents and businesses as possible,” said David Burton, Chair of EORN. “While complex in terms of the number of pieces that had to come together, the result is improved quality of life for the community.”

In areas that cannot connect with the wireless or wired service, a satellite solution provides connectivity to speeds of up to 10 Mbps.

Thanks to a joint investment from the governments of Canada and Ontario, the Eastern Ontario Wardens’ Caucus Inc., and private sector partners, 29,000 homes and businesses across the United Counties of Stormont, Dundas and Glengarry now have access to the service, enabling the use of the latest web-based applications, and information and entertainment resources.

“Strategic investments in broadband infrastructure give residents and local businesses access to broadband services that are essential to succeed in today’s economy,” said Grant Crack, MPP for Glengarry—Prescott—Russell. “We’ve also recently expanded the project to include new fibre optic connections to business parks across the region, including in Stormont, Dundas and Glengarry and Prescott-Russell, further improving economic opportunities in the area.”

“In the new global economy, broadband Internet has become essential infrastructure for individual and community economic prosperity,” says Guy Lauzon, MP for Stormont–Dundas–South Glengarry . “It spurs innovation, commercialization, worldwide communication, and job creation. Our Government is proud to be contributing to a project that now enables one more Eastern Ontario community to have improved internet access.”