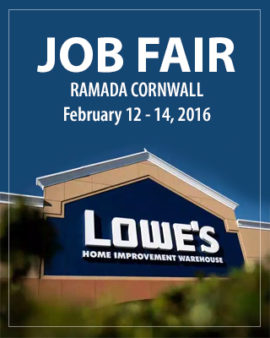 
Cornwall Ontario – Lowes will be holding a job fair at the Ramada Hotel in Cornwall this weekend.

The company will be looking to fill 80 permanent positions as well as 50 seasonal positions.

“We are hoping to meet as many people as possible over the three days,” says Kevin Ronse, Human Resources Manager for Cornwall Lowe’s.

“Job seekers are encouraged to bring along a copy of their resume.”

Lowe’s will be hiring for a variety of positions throughout the store, including Department Managers, Sales Specialists, Overnight Stockers, Loaders, Cashiers, Head Cashiers, and Customer Service Associates. The hours for the job fair are as follows:

In addition to the job fair, job seekers can also apply directly online. A link to the online job listings can be found in the Jobs in Cornwall page on this website.

Lowe’s is a home improvement company serving approximately 16 million customers a week in the United States, Canada and Mexico. With fiscal year 2014 sales of $56.2 billion, Lowe’s has more than 1,845 home improvement and hardware stores and 265,000 employees. Lowe’s opened its first stores in Canada in December 2007 and now operates in 42 stores in Ontario, Alberta, Saskatchewan and British Columbia with more than 6,000 employees.