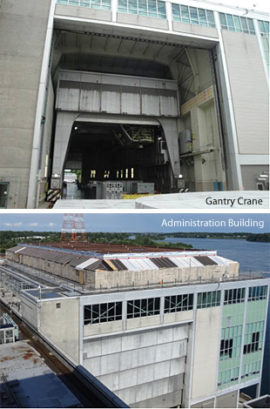 
Cornwall Ontario – The powerhouse gantry crane at Ontario Power Generation’s RH Saunders Hydroelectric Generating Station has been rolling up and down the tracks for over 56 years. After such a long and distinguished career, the crane is being retired, to be replaced by a modernized design.

It is one of two major redevelopment projects currently underway at RH Saunders, which is the second largest hydroelectric station in Ontario.

“The new crane is a timely investment with RH Saunders scheduled to start another major overhaul program in 2019,” says Scott Gagnon, Project Site Manager at the station.

The electrically operated travelling crane has a main hoist lifting capacity of 300 tons, with two rotating auxiliary “jib” hoists rated at 15 tons each. The crane was designed to cover hoisting operations over the 1518-foot length of rails sitting on the Saunders powerhouse with operating speeds up to 100 feet per minute when fully loaded. The crane was designed to serve as a back up for its counterpart on the New York Power Authority dam.

The original crane was instrumental in the installation of the turbine-generator assemblies during construction of the station. At times the crane was used to support crews from two generator manufacturers (Canadian Westinghouse and Canadian General Electrical) and a turbine erector (English Electric), all working on up to six separate units at once. After construction, the crane was used heavily on a major overhaul and runner replacement program, main output transformer replacements, and regular maintenance outages.

Unlike most other hydroelectric generating stations, RH Saunders does not have a powerhouse superstructure. As a result, this crane is unique in design, equipped with a roof and retractable overhead doors that act as a portable powerhouse enclosure. The crane is also required to be compact enough to fit through overhead doors when transporting large pieces of equipment into the maintenance and assembly bay.

The administration building was constructed in 1958 for the St. Lawrence Power Project.  The building houses the main control room, maintenance shops and offices.  The building envelope requires rehabilitation due to condition and structural issues with the brick wall.

A rehabilitated building envelope (roof, windows and cladding) is required to protect the main control room, equipment and shops within the building.  New walls, windows and cladding will provide an additional benefit of increased energy efficiency.  The administration building is a critical structure for the continued operating of the OPG-RH Saunders Hydroelectric Generating Station.

The Cornwall office of WSP (formerly Thompson Rosemount Group) provided architectural and engineering designs and local construction forces working on the project include roofers, window glaziers, masons, labourers, carpenters and sheet metal workers. An average construction workforce of 20 will be present throughout the project, which is scheduled for completion in 2015.

The Robert H. Saunders St. Lawrence Generating Station is operated by Ontario Power Generation (OPG) and is one of two large generating stations housed in the kilometre-long Moses-Saunders Power Dam. Built across the St. Lawrence River and the international boundary between Canada and the United States of America, it shares the structure with the New York Power Authority.

Many upgrades made over the years ensure the long-term continued, safe and reliable operation of the station’s sixteen generating units. Since upgrading, the station’s capacity to produce electricity has increased by 16 per cent and the reliability of units has improved significantly. OPG and the approximately 70 Saunders GS staff have received international recognition for station improvements and operational excellence, and have maintained an impressive safety record.

The RH Saunders station can produce up to 1045 MW of renewable energy and provides approximately 5% of Ontario’s entire energy requirements. Annually, the station generates over six billion-kilowatt hours of electricity, equivalent to meeting the needs of over 600,000 homes. The energy produced from the station is one of the most clean, affordable and sustainable sources of energy in the province.

The RH Saunders Station is located in the west end of Cornwall.

In 2010 OPG opened the nearby St. Lawrence Power Development Visitor Centre which is open to the public.

Various interactive displays recount the fascinating history of the St. Lawrence Seaway and Power Project and addresses its impact on specific communities such as the Mohawks of Akwesasne and the Lost Villages. There is a variety of video presentations available, and displays on hydroelectric, thermal and nuclear generation, safety around power facilities, the American eel and the St. Lawrence Seaway. As well, a community room is available for use by local organizations.

Regular hours are 9 am to 4:30 pm, Monday through Friday.