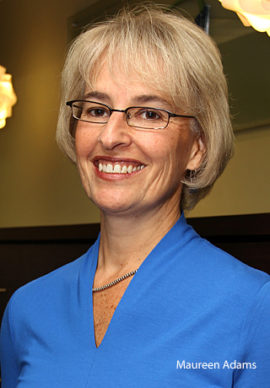 Maureen Adams Appointed CAO for the City of Cornwall


Cornwall Ontario – The City of Cornwall has a new Chief Administrative Officer. And for the first time in the history of the municipality, the position will be filled by a woman.

Maureen Adams officially takes on her new responsibilties on Monday May 2, replacing outgoing Norm Levac, who retired at the end at April following a lengthy and productive career with the City of Cornwall.

“City Council conducted a thorough search for the replacement of Mr. Levac and we are pleased with the result,” said Mayor Leslie O’Shaughnessy. “Maureen Adams is the perfect fit for continuing many of the progressive initiatives currently underway and we are pleased that she has accepted this position.”

Mrs. Adams is no stranger to the City of Cornwall.

For the past eight years, she has served as the General Manager and Chief Financial Officer for the City, a key position that involves overseeing the annual City Budget process and ensuring the City maintains a strong financial position. In this capacity, Mrs. Adams oversaw financial plans for key infrastructure projects such as the Benson Centre and Wastewater Treatment Plant upgrade.

Her leadership experience in the municipal sector is complemented by a 20-year private sector career in both the banking and manufacturing industries.

“I am really excited by this new opportunity to work alongside the Mayor and Council and build Cornwall into an even greater City,” said Mrs. Adams. “We have a lot of great attributes and I’m looking forward to working with Council, City staff and community partners to build on our strengths.”

More information on the City of Cornwall and its programs and services can be found on the main City website: