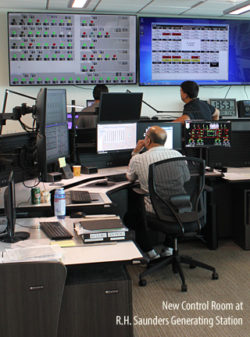 The Saunders Generating Station was determined to be the best location for consolidation as it had the space to accommodate expansion of the existing control room, the facilities to meet the needs of additional staff, and modern utility and communication services.

As part of the transition, operators from Saunders GS and Chenaux GS traded places to familiarize themselves with the nuances of operating the different plants. “The project has relied on a breadth of expertise,” said Dwyer. “Collaboration has ensured a safe and successful transition to the new operating structure.”

The Robert H. Saunders St. Lawrence Generating Station is operated by Ontario Power Generation (OPG) and is one of two large generating stations housed in the kilometre-long Moses-Saunders Power Dam. Built across the St. Lawrence River and the international boundary between Canada and the United States of America, it shares the structure with the New York Power Authority.

Many upgrades made over the years ensure the long-term continued, safe and reliable operation of the station’s sixteen generating units. Since upgrading, the station’s capacity to produce electricity has increased by 16 per cent and the reliability of units has improved significantly. OPG and the approximately 70 Saunders GS staff have received international recognition for station improvements and operational excellence, and have maintained an impressive safety record.

The R.H. Saunders station can produce up to 1045 MW of renewable energy and provides approximately 5% of Ontario’s entire energy requirements. Annually, the station generates over six billion-kilowatt hours of electricity, equivalent to meeting the needs of over 600,000 homes. The energy produced from the station is one of the most clean, affordable and sustainable sources of energy in the province.

The R.H. Saunders Station is located in the west end of Cornwall.

In 2010 OPG opened the nearby St. Lawrence Power Development Visitor Centre which is open to the public.

Various interactive displays recount the fascinating history of the St. Lawrence Seaway and Power Project and addresses its impact on specific communities such as the Mohawks of Akwesasne and the Lost Villages. There is a variety of video presentations available, and displays on hydroelectric, thermal and nuclear generation, safety around power facilities, the American eel and the St. Lawrence Seaway. As well, a community room is available for use by local organizations.