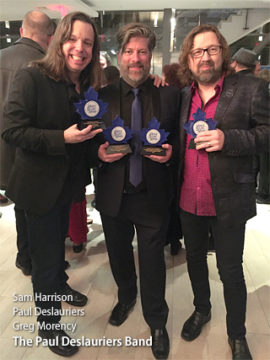 
Cornwall Ontario – Cornwall’s Paul Deslauriers may have trouble singing the blues for a little while –  given all of the glitter on his mantle.

The well-travelled musician and his band recently cleaned up at the Maple Blues Awards in Toronto, taking home 4 separate awards – including the coveted Entertainer of the Year award.

“We are extremely grateful with the recognition and thrilled that the fans took the time to vote,” says Mr. Deslauriers. “Just to be nominated was a big surprise in a lot of ways. There are a lot of excellent musicians that were nominated and we’re big fans of their work.”

In addition to Entertainer of the Year, the Paul Deslauriers Band was also named Electric Act of the Year, and band members Greg Morency and Sam Harrison were named Bassist and Drummer of the Year respectively.

One of the presenters at the awards ceremony was Cornwall singer-songwriter Melanie Brulée.

“I am so happy for Paul Deslauriers and his band, they are great musicians,” says Ms. Brulée. “It was very exciting to be part of the Maple Blues Awards and to help represent Cornwall!”

The accolades are in part due to the success of Relentless, the second album from The Paul Deslauriers Band. The album, which was launched in Cornwall in 2016, has secured critical acclaim from critics and fans alike.

Fans will get a chance to the newly crowned Paul Deslauriers Band in action on February 11th at the Port Theatre in Cornwall.

“We are certainly looking forward to playing again in Cornwall and celebrating these awards with our fans,” says Mr. Deslauriers.

A virtuoso on both electric and acoustic guitars, Mr. Deslauriers has had a diverse and accomplished career. He gained acclaim in the 1990s as a founding member of Black Cat Bone, deemed by many critics at the time to be one of Canada’s hottest blues-rock bands.  He would go on to work with award-winning singer/songwriter Dawn Tyler Watson as well as finding time to release three solo records.

In 2014, he joined forces with Greg Morency and Sam Harrison, releasing the album titled The Paul Deslauriers Band.  It was the same year he was voted Canada’s top blues guitar player at Maple Blues Awards.

In 2016, The Paul Deslauriers Band joined 250 other bands from all over the world on Beale Street in Memphis, Tennessee for the 32nd International Blues Challenge. At the end of the week, the trio were the lone Canadian finalists, eventually taking second place in the band category.

About the Maple Blues Awards

The Maple Blues Awards is Canada’s is a national program that promotes blues music across Canada, recognizing outstanding achievement in the field.

The Maple Blues Awards are handed out a gala in Toronto in January each year.