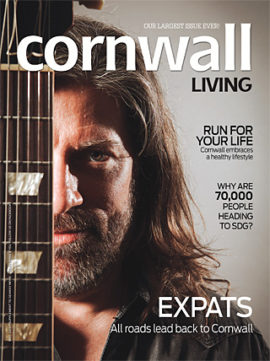 
Cornwall Ontario – It’s a been a great year for Cornwall’s Paul Deslauriers. He released a critically acclaimed new album, was voted Canada’s top blues guitarist, and now graces the cover of the new edition of Cornwall Living magazine.

All three are important milestones, but it’s clear that Cornwall has a special place in his heart.

“When I was asked last year to be a Team Cornwall ambassador for my hometown, I was more than thrilled by the gesture, now this tops the cake!” said Mr. Deslauriers. “I was born and raised and educated in Cornwall until I left to pursue my dream of becoming a professional musician. The values I learned and the sense of community I grew up with carry me through the world on my journey, but it is above all the people of this great city that make coming home so special every time!”

Mr. Deslauriers leads off an article about people who grew up in Cornwall but their talents have led them to other locales. These expats include actor Ryan Gosling, businessman Daniel Lalonde, scientist Julie Lefebvre and many others.

“We knew people would be interested in learning more about some of our more accomplished sons and daughters living abroad,” says Rick Shaver, Publisher. “The common thread linking them all is a very strong connection to their hometown – and their families and friends.”

Get a Sneak Peek of the Magazine

You can grab a sneak peak at some of the photographs and stories in this short video on the ChooseCornwall YouTube Channel. The video features music from the new album by Melanie Brulee:

Of course, Cornwall Living features several stories about people that are succeeding right here in Cornwall and the Counties. In fact, at 108 pages, the 2015 edition is the biggest yet.

“We cover some great stories that touch on living, arts and culture, fitness, heritage and business,” says Mr. Shaver.

“We had so much to share that we simply had to add more pages.” One of the popular segments of the magazine to emerge over the past few years is the annual story on the local real estate market. Several developers and real estate companies support the magazine which is often read by people looking to relocate to the area.

Other stories in the magazine showcase the ongoing revitalization of Cornwall’s Heart of the City, the ever popular Cornwall Triathlon, local entrepreneurs, profiles of St. Lawrence College and NAV CENTRE and a feature on upcoming International Plowing Match, which is expected to attract 75,000 people to the area.

2015 marks the 22nd year that TC Media- Seaway News has published a quality gloss magazine celebrating life in Cornwall.The magazine is designed and edited by Colleen Parette, and many of the stories were written by Seaway News editor Todd Lihou, who recently picked up an award for his writing skills. The cover was shot by local photographer Jason McNamara. With an overall circulation of over 40,000, the magazine is a collaboration of advertisers, writers, photographers and staff members.

Cornwall Living is always a popular addition to the information packages that Cornwall Economic Development sends out to business and residential investors. In addition to trade shows and other efforts, the magazine finds its way to thousands of businesses and government officials in Canada, the United States and abroad.

A copy of the magazine can be requested by filling out the request form on this website. It is also available at a number of locations throughout Cornwall, including the Cornwall Civic Complex, City Hall and at the TC Media offices at 601 Campbell Drive.