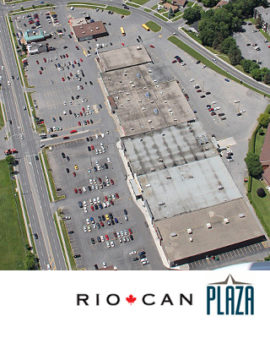 
Cornwall Ontario – Cornwall’s venerable Eastcourt Mall is due for another makeover.

RioCan and Plaza Retail announced today that they have entered into a 50/50 joint venture focused on redeveloping the mall, currently owned by RioCan.  Under the terms of the arrangement, Plaza will manage the mall and oversee redevelopment efforts.

The announcement was confirmed today at the ICSC Conference in Montreal.

“We are very pleased to enter into this venture with Plaza who has an excellent reputation for redeveloping centres in central and eastern Canada, which will allow RioCan to focus on its own development strategy of urban intensification in Canada’s six major markets” said Edward Sonshine, CEO of RioCan.

Under the agreement, RioCan sold a 50% managing interest in Eastcourt, along with another mall in New Liskeard, Ontario and one in Mirimichi, New Brunswick, for an aggregate sale price of $11.5 million. The three properties were sold free and clear of financing.

“We are excited to have an opportunity to work with RioCan to redevelop these three properties,” stated Michael Zakuta, President & CEO of Plaza. “These redevelopments will unlock long-term value for our respective unitholders by creating stronger and more stable retail properties in these markets.”

Eastcourt Mall is a commercial retail property located at 1380 Second Street East in the east end of Cornwall. The Mall underwent a major redevelopment in the Fall of 2013 with the operning of new 4 new stores (Ardene, Dollarama, No Frills and Urban Planet). With over 176,000 sq.ft. of leasable space, Eastcourt is also home to the Beer Store, Royal Bank, Anytime Fitness, Tim Hortons and other retailers.

RioCan is Canada’s largest real estate investment trust with a total enterprise value of approximately $16 billion as at March 31, 2016. RioCan owns and manages Canada’s largest portfolio of shopping centres with ownership interests in a portfolio of 303 Canadian retail and mixed use properties, including 16 properties under development, containing an aggregate net leasable area of 46 million square feet. For further information, please refer to RioCan’s website at www.riocan.com.