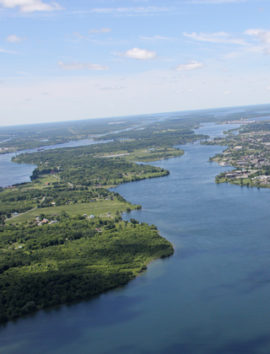 “We certainly welcome the warmer weather,” said Terence Bowles, President and CEO of the St. Lawrence Seaway Management Corporation. “A return to an opening in the third week of March provides our clients with the opportunity to move cargo in a timely manner, and make the most of the navigation season.”

Approximately 160 million tonnes of cargo travels over the combined Great Lakes / Seaway System on an annual basis, supporting over 227,000 jobs and $35 billion in economic activity.

The operning was celebrated with the passage of one of Canada Steamship Lines’ state-of-the-art Trillium Class self-unloading Lakers. The vessel is part of a new generation of vessels in the Lakes that are more reliable, energy efficient and environmentally-friendly.

“The ongoing investment in new vessels by a variety of Seaway carriers underscores our customers’ faith in the future of the waterway” said the SLSMC’s Bowles. “In parallel with our customers’ investments, the Seaway’s award winning modernization program is now well-over 50% complete, with Hands-Free Mooring operational at eight of the Seaway’s locks. We are making steady progress in bringing about gains in efficiency and safety for all concerned, ensuring a highly competitive transportation system for years to come.”

The binational St. Lawrence Seaway serves as the linchpin within the Great Lakes / Seaway System, connecting the lower St. Lawrence River to the Great Lakes.  Beginning in Montreal and extending to points west, the Seaway’s 15 locks (13 Canadian and 2 U.S.) enable ships to climb a total of 168 metres from “sea level” up to Lake Erie.

“The Great Lakes St. Lawrence Seaway System continues to be an environmentally sustainable, vital route for commerce in the global supply chain,” said Betty Sutton, Administrator of the U.S. Saint Lawrence Seaway Development Corporation. “The Great Lakes region, North America’s ‘Opportunity Belt’, is a thriving and influential destination and the Seaway System connects this region to the world. Businesses are choosing to move their cargo through the Seaway System because of the economic benefits, safety, and reliability of our waterway, and its direct access to the heartland of North America.”

In terms of the outlook for 2016, the SLSMC’s Terence Bowles noted that a lower Canadian dollar may spur more Canadian exports this year. “The combination of a rebound in Canadian manufacturing activity, a solid U.S. economy, and the prospect of more trade with Europe brings about several catalysts which may boost Seaway tonnage”, said Bowles.

The St. Lawrence Seaway Management Corporation was established in 1998 as a not-for-profit corporation by the Government of Canada, Seaway users and other key stakeholders. In accordance with provisions of theCanada Marine Act, the Corporation manages and operates the Canadian assets of the St. Lawrence Seaway, which remain the property of the Government of Canada, under a long-term agreement with Transport Canada.

For more information on the St. Lawrence Seaway, please consult the www.greatlakes-seaway.comwebsite.