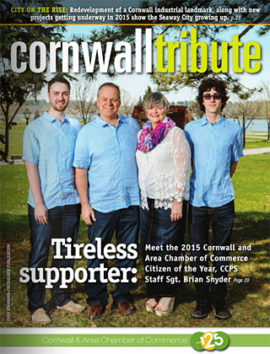 
Cornwall Ontario – Cornwall Tribute is back … just in time for the summer.

The glossy lifestyle magazine features 48 pages of stories on development in Cornwall and is published by local newspaper Standard-Freeholder. The 2015 edition marks the second year under the nameCornwall Tribute, although the publication can trace it roots back to the early 1990’s when the paper produced a large tabloid called the Progress Edition.

“Cornwall Tribute provides an opportunity to see how the city continues to change and grow,” says Hugo Rodrigues, Managing Editor of the Standard-Freeholder. “It’s information that can be useful year-round for those looking to learn more about Cornwall, whether they’re reading from here or away.”

The cover story for this year’s edition is local policeman Brian Synder, who was recently named Citizen of the Year.  Staff Sgt. Snyder is a member of the Cornwall Police Service, and is well known in the community for his lifelong passion for volunteering with several different organizations.

“We’re a city on the rise: redevelopment of Cornwall industrial landmark, along with new projects getting underway in 2015 show the Seaway City is growing up,’ says Peter Padbury, Advertising Directory for theStandard-Freeholder. “We hope everyone thoroughly enjoys reading about their neighbours, friends, and collegues.”

The magazine also includes a story that profiles the 125 history of the Cornwall and Area Chamber of Commerce, one of Ontario’s oldest business organizations. Cornwall is growing, and three articles focus on new housing developments in Cornwall, along with a large map displaying new subdivisions.

“The magazine offers a positive reflection of Cornwall and the surrounding area, and it provides us with one more tool to use when marketing our community to potential new residents and investors.” said Mark Boileau, Manager of Cornwall Economic Development.

Other stories in Cornwall Tribute include a profile of the Cornwall Colts, a feature on Cornwall’s waterfront, and a planned addition to the Cornwall Community Hospital.  The magazine wraps up with a story on the International Plowing Match, which is expected to bring 75,000 visitors to the Cornwall area this September.

Cornwall Tribute will have a total circulation of 14,000. Cornwall Economic Development will be distributing 1000 copies to people looking to move to the City.

You can view the entire magazine online here:http://virtual.standard-freeholder.com/doc/Cornwall-Standard-Freeholder-special-sections/cornwall-tribute-2015/2015052901/#0