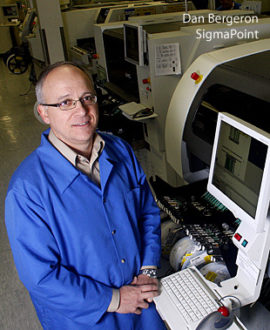 
Cornwall Ontario – Sigmapoint Technologies has been awarded an important subcontract for the federal government.

The Cornwall manufacturer has been subcontracted to manufacture the circuit boards for a project that involves upgrades to Canadian military hardware. Recently, the Federal Government announced the award of a $137.8-million contract to General Dynamics Canada of Ottawa for upgrades to the Canadian Armed Forces’ combat net radios and vehicle interface units.

“Our Lean Manufacturing capabilities have given Sigmapoint the competitive advantage to win this contract with General Dynamics Canada,” says Dan Bergeron, President & CEO of Sigmapoint. “Our collaborative culture will ensure success and allow both companies to capture more market share along with having a strong competitive advantage.”

The project is a boost to the growing electronics manufacturer, which has steadily re-invested in

new technoglogy at its facilities in the Cornwall Business Park.

“This is definitely good economic news for Cornwall and Eastern Ontario,” says Guy Lauzon, Member of Parliament, Stormont-Dundas-South Glengarry. “It is great to see local jobs supported through federal government contracting right here in our community.”

Combat net radios are used in all armoured vehicles and personnel carriers for transmitting and receiving tactical voice and data communications on all army operations and training missions. Vehicle interface units are amplifiers that boost the signal from the radio, thereby increasing their communication range.

The Government of Canada is committed to creating jobs and economic growth, and to leveraging the economic benefits of contracts like this one through the Industrial and Regional Benefits Policy. This policy ensures that companies awarded defence and security contracts conduct high quality and advanced technology business activities in Canada, equal to contract value.

This contract is another example of the Government of Canada’s commitment to the Canadian Armed Forces, while supporting Canadian manufacturing, skills and ingenuity and jobs.