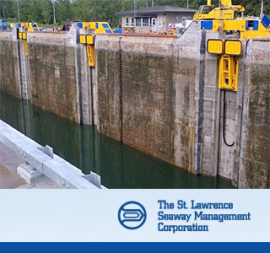 
Cornwall, Ontario – The world’s world’s first Hands-Free Mooring system for ships transiting the locks along the St. Lawrence Seaway has garnered a prestigious award from the Organization for Economic Cooperation and Development (OECD).

“With the creation of the world’s first Hands-Free Mooring system for movement of ships through locks, I am proud to say that The St. Lawrence Seaway Management Corporation is truly a world leader in marine technology,” said the Honourable Lisa Raitt, Minister of Transport .

The Promising Innovation in Transport Award is offered by the International Transport Forum at the OECD, an intergovernmental organization for the transport sector, with 54 member countries. It will be presented on May 28th in Leipzig, Germany, during the 2015 Summit of Transport Ministers.

The pioneering work was completed by the Seaway with the aid of its supplier Cavotec.  The St. Lawrence Seaway’s 15 locks serve to lift ships a total of 168 meters (551 feet) as they transit from Montreal to Lake Erie. The Hands-Free Mooring system employs vacuum pads mounted on vertical rails to secure the ship during the lockage process, tracking the ship as it is raised or lowered, while keeping it at a fixed distance from the lock wall.

The equipment replaces the traditional practice of manually securing cargo ships in locks with steel mooring lines, which is time consuming, labour intensive and potentially dangerous if a line breaks.

“Seaway employees have demonstrated an innovative spirit that is essential to success in today’s global economy,” said Terence Bowles, President and CEO, The St. Lawrence Seaway Management Corporation .  “With strong support from a wide variety of stakeholders, including Transport Canada who partnered with us in providing funding for the modernization project, we are setting the stage for a thoroughly modern lock operating system, which will ensure the Seaway’s future competitiveness and sustainability.”

Full deployment of the Hands-Free Mooring system at all high-lift locks is slated to be completed in 2018.

The St. Lawrence Seaway Management Corporation was established in 1998 as a not-for-profit corporation by the Government of Canada, Seaway users and other key stakeholders. In accordance with provisions of theCanada Marine Act, the Corporation manages and operates the Canadian assets of the St. Lawrence Seaway, which remain the property of the Government of Canada, under a long-term agreement with Transport Canada.

For more information on the St. Lawrence Seaway, please consult the www.greatlakes-seaway.comwebsite.