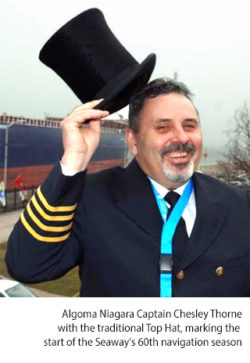 
Cornwall Ontario –  The St. Lawrence Seaway officially opened for the 2018 shipping season, with the transit of the newly built Algoma Niagarathrough Lock 3 on the Welland Canal on March 29.

2018 marks the 60th navigation season for the waterway and the 20th anniversary of the St. Lawrence Seaway Management Corporation (SLSMC).

“As we enter the 60th navigation season, the Seaway has the capacity to double its current tonnage within its existing locks and channels” said Terence Bowles, SLSMC President and CEO. “The stage has been set for a St. Lawrence Seaway that will effectively serve its stakeholders for decades to come, with strong advancements in efficiency, safety, and flexibility to respond to varying market conditions.”

The SLSMC has invested over $1 billion in asset maintenance, renewing many parts of the infrastructure that date back to 1959 in the Montreal-Lake Ontario section, and back to 1932 in the Welland Canal section. Some of the most dramatic changes have taken place within the Welland Canal, including a series of tie-ups walls that were recently rebuilt, representing an investment of $100 million.

The Algoma Niagara is part of a multi-billion dollar fleet renewal program undertaken by shipowners who frequent the St. Lawrence Seaway, underlining the industry’s strong degree of confidence in the future of the waterway. As the most energy efficient means of moving cargo with the lowest carbon footprint, these newly built ships play an important role in supporting both economic growth and enhanced trade in a highly sustainable manner.

The Seaway’s modernization program coupled with the marine industry’s fleet renewal positions the waterway as a highly competitive transportation system.

“We are very pleased to celebrate 20 years of progress,” noted Mr. Bowles “Since 1998, the SLSMC has worked collectively with its partners to reinforce the Seaway’s competitiveness as a vital transportation artery. Our modernization program brings about the greatest advancements in Seaway operations since its inception 60 years ago.”