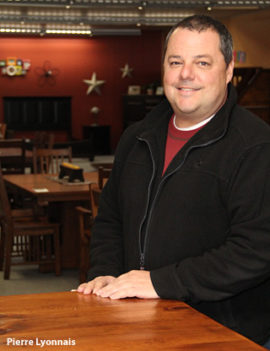 
Cornwall Ontario – Pierre Lyonnais is a business owner with a vision. Over the past 9 years he has built a solid business with his furniture store – and now he has taken steps to secure long-term success for his ventures.

In September, Mr. Lyonnais purchased Mattress World, a well-established mattress store at 739 Montreal Road in Le Village. He also purchased the building, and promptly moved his furniture business into the premises.

“I wanted to invest in Cornwall and start to build equity instead of renting,” says Mr. Lyonnais. “The East End brings me closer to many of the other furniture stores in the Cornwall area. Montreal Road is one of the busiest streets in the city and new residential buildings have recently been built in the area.”

“Rustic wood furniture is very popular as people can see and feel the quality that can only come from hand-crafted natural wood,” says Mr. Lyonnais. “With furniture and bedding I am part of a larger buying group which allows me to get better pricing for my customers.”

The new store is three-times the size of the old Table and Chair location on Boundary Road. The building was built in 1958 and while sound structurally, it needed some improvements to bring it up to par.

Mr. Lyonnais reframed the front of the building and put in new windows along with stucco and a modern brick facade. New paint was applied inside and out and the old awning sign was replaced. Work began in November and wrapped up in January, with the cost of the renovations tallying close to $50,000.

The end result is an attractive open-concept store that is helping to establish Le Village as the go-to place to shop for furniture.

“The Heart of the City is a great program,” says Mr. Lyonnais. “I would not have been able to complete the renovations the way I wanted without the financial assistance from the program.”

With new employers attracting new people to Cornwall and developers building new apartment buildings and condos, Mr. Lyonnais has a positive outlook for his city and his business.

“I think Cornwall is a city that is evolving and the future looks very bright. I think the people in the city are also very conscientious about supporting local business.”

Le Village is a “main street” commercial district in Cornwall that runs along Montreal Road from Marlborough Street east to St. Lawrence Drive. It offers a diverse mix of professional offices, restaurants, retail stores and residential buildings. The area is in the midst of a revitalization as new businesses set up shop. It is also an area with immediate access to the St. Lawrence River, attracting new residents.

About the Heart of the City Program

Cornwall’s Heart of the City initiative supports revitalization projects that occur in the central core, or “Heart of the City”. The  program has a number of tools to help landowners undertake property improvements, with a special focus on aesthetic improvements, and the upgrading and renovation of commercial properties and ancillary residential units.