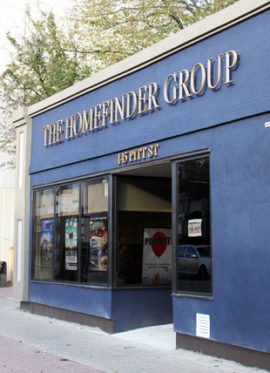 
Cornwall Ontario – For nearly 10 years, the staff of The Homefinder Group has been busy helping Cornwall and area house hunters find their dream homes. That didn’t stop the Homefinder from finding a dream home of its own, right in the heart of Cornwall.

The new office represents the next step in the overall growth of the company, which was started in 2004 by Sylvie Legault, a Pierrefonds native who moved to Cornwall in 1999.

“It’s a very good location. In the summertime, there’s a lot of action and lots of people walking around,” said Mrs. Legault of her new locale in the Downtown core. “I’m really pleased with what the Downtown looks like and I’m glad that we are a part of it.”

Along the way, Mrs. Legault was joined by Pierre Boucher as a partner in the business, and the company’s offerings continued to grow with the purchase of Eastern Ontario Homes magazine – covering a readership area from the Quebec border to Kingston – and the launch of the Easyfinder, a shopper’s guide.

Having started as a home-based business, Mrs. Legault said they realized a need to establish a permanent office location as the company continued to grow. That realization eventually lead them to the former Clark’s building on Pitt Street – a spot which offers high visibility and easy access for real estate agents and customers who wish to visit.

“At that moment in time we said we needed a bigger space to work in,” she added.

The company received assistance from the City of Cornwall’s Heart of the City Community Improvement Plan (CIP) to assist with façade and other building-related improvements to the Clark’s building. The Heart of the City CIP is designed to assist property owners to improve their properties by offering financial incentives such as grants and interest-free building restoration loans. Community Improvement Plans are seen as a key tool to stimulate downtown revitalization efforts.

With the new office now up and running, Mrs. Legault said she is quite pleased with just how far the company has come in a relatively short time. In addition to the print publications, the company has also launched Infinity Communication and Design, a sister business offering print and graphic design services.

The Homefinder Group is now home to 8 employees.

“I was hoping (it would grow) but at first I didn’t expect to have more than one (publication),” she said.

The Homefinder is distributed free of charge through grocery stores, restaurants and other public spaces throughout Cornwall and the surrounding area.

To celebrate the new office, The Homefinder Group is hosting an open house on Wednesday, November 6th, from 5 pm to 9 pm in conjunction with the Downtown Cornwall ‘Rocking around the Christmas Tree’ Event.

You can find additional information on The Homefinder Group at www.homefinderweekly.com or on Facebook at  https://www.facebook.com/HomefinderGuide.