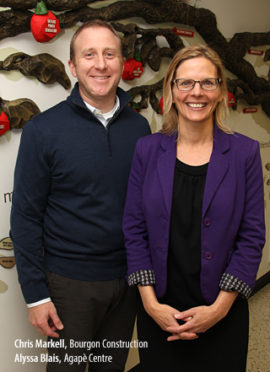 “This was a major project, but I am happy to say that it was completed on-time and on-budget,” says Alyssa Blais, Executive Director of the Agapè Centre. “The changes were long over-due and we now have a functional building that will serve the people of Cornwall for decades to come.”

Staff and the Agapè Centre Board of Directors looked at all options before committing to the project.

“We conducted a feasibility study to look at the pros and cons of moving to a different location,” notes Ms.  Blais. “The cost was prohibitive. Renovating was clearly the least expensive option and the one that made the most sense.”

The renovation project addressed several areas of the building that had fallen into disrepair, such as a complete overhaul of the heating and plumbing systems. Some flooring was replaced and asbestos was removed. The entrance was made more accessible with a new ramp and over a dozen windows were replaced.

“Despite having great bones, the building was badly showing signs that it was well past the end of its first design life,” said Chris Markell, owner of Bourgon Construction.

Other changes were made to improve efficiencies in the building, such as the relocation of the food bank to allow the storage of food on the main level.

The total value of the investment was $946,000, with over $800,000 raised through private donations, foundations and grants. A further $19,000 was received from the City of Cornwall through the City of Cornwall’s Brownfield Community Improvement Program.

“We are extremely grateful for the generosity of the community in helping fund the renovations,” said Ms. Blais. “We rely on daily donations for our operating costs, and it was very heartwarming to receive support to make this building more accessible, safer and efficient.”

The 20 week project was directed by Bourgon Construction, who oversaw all design, approvals and construction activities.  Work was completed with minimal disruption to ongoing operations. Several other local companies were involved in the project, most notably Architecture 49, WSP, Marleau Mechanical and Bisson Electric.

“I want to applaud Alyssa Blais, her staff and the Agapè Centre’s Board Members and Within These Walls campaign members,” said Mr. Markell. “The team identified clear needs in the community, raised the funds to make it happen, and worked collaboratively to see the project completed in less than a year. Well done!”

The Agapè Centre is the largest food bank and soup kitchen program in Cornwall providing emergency food relief and clothes for those who need it most.  Agapè means love and the Centre serves all people without the preference to colour, race or religion. The Agapè Centre relies 100% on the donations of time, food, money, clothing and other household items from the community to help families that access our services.