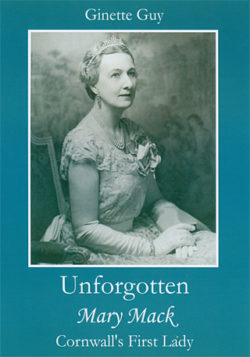 
Cornwall Ontario – By all accounts, Mary Mack led a remarkable life. A world traveller, artist and the first female to be elected to Cornwall City Council, she made an indelible mark on the city that is felt even to this day.

Mary Mack’s life is explored in a new book by Ginette Guy. Entitled Unforgotten – Mary Mack – Cornwall’s First Lady, the book is 174 pages and includes dozens of photographs and illustrations.

“Her life spans two World Wars, the Great Depression and building of the Seaway and Hydro Project,” says Ms. Guy. “She provided leadership both as an alderman and as a volunteer in no less than 20 organizations within the City during those challenging times.”

Mary Mack was born in Cornwall in 1899, at a time when the City was experiencing rapid growth with newly installed flower, paper and cotton mills. She would study art in Montreal, where she would become lifelong friends with A.Y. Jackson of the Group of Seven. Her paintings received glowing reviews and she worked helped establish the Cornwall Art Association in 1934.  She would also become increasing involved in charitable and community projects. In 1946, she was elected to Cornwall City Council.

“Writing the book gave me an opportunity to learn so much, about the social history of Cornwall, and the context of her life,” says Ms. Guy. “The research was extensive, including some of her own correspondence. What is interesting is how her life could have gone so many different ways; first as an artist, then socialite and politician. She was active on a provincial and even national level, but her heart was always for her hometown, she was so proud of her heritage.”

Ms. Mack would also help influence development in Cornwall as the Chair of the Industrial Development and Publicity Committee, and help celebrate the region’s history as Chair of the SDG Historical Society.

“Mary Mack lived the slogan “Choose Cornwall”… and when things were not as she would have liked them, or she saw a need, she acted on it and chose to make a difference,” says Ms. Guy. “Some of her concerns and writings are as relevant today as they were so many years ago.”

Unforgettable is available only at the Conwall Community Museum and the Lost Villages Museum for $15.  Mail orders are available via email to cornwallhistory@outlook.com.

A special book launch of will be held at  2:15pm at the Cornwall Community Museum on Saturday September 16, followed by an informal tea.