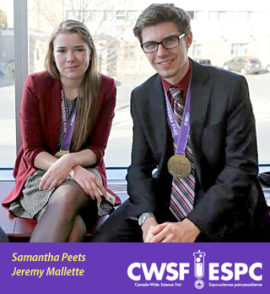 The pair developed their Ultrasonic Personal Object Detector (UPOD) as a wearable navigation device for the visually impaired. The UPOD uses tones that sound at an increasing speed to indicate that the wearer is getting closer to a nearby object. It can also sense different elevations.

“We just came up with the idea in a moment of spontaneous inspiration,” said Mr. Mallette. “After that, we organized all the possibilities, weighed the pros and cons, and then started working on it.”

The two were able to run some real-life tests of their device at the Canadian National Institute for the Blind’s Ottawa office.

“The staff at the CNIB were very supportive,” said Ms. Peets. “It was really exciting to see that our device can be useful. And with the feedback we’ve received from them, we realize we could do so much more with it.”

Mallette and Peets were awarded the all-expenses paid, week-long trip to the Canada Wide Science Fair at the United-Counties Science Fair, which took place in Cornwall this April.

“They are all incredible kids,” said Mike O’Neil, a local Science Fair organizer who accompanied the group.

About the United Counties Science Fair

The United Counties Science Fair is held in Cornwall every April, and this year celebrated its 40thanniversary. The fair is a non-profit organization that aims to encourage students to explore the many fields of science, and to develop critical thinking and reasoning skills. Check out the following website for more info:

About the Canada Wide Science Fair

The Canada Wide Science Fair attracts 500 of the nation’s brightest young minds and offers an amazing expoloration into science, technology, engineering and math. Young scientists showcase real-world solutions to some of the globe’s most pressing issues, and at the same time compete for nearly $1 million in awards. The Fair is operated by Youth Science Canada, which for 50 years has been Canada’s leading organization for the promotion of innovation and celebration of excellence in science, engineering and technology among our Canada’s youth.