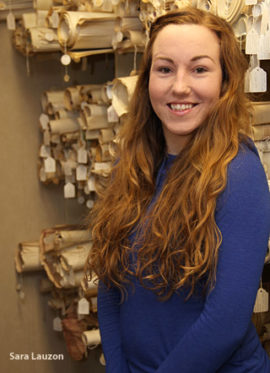 
Cornwall Ontario – Cornwall is one of Canada’s oldest communities, and over the course of its many decades, it’s residents have done some incredible things. The stories, myths and legends are like whispers in the wind, waiting for somebody to listen.

One person who has listened and is now getting others excited about Cornwall’s heritage is Sara Lauzon. The 23-year old has developed a sizable following as she unearths story after story of Cornwall’s past. To Sara, the wealth of information means it is never difficult to pick a topic to write about.

“Interest lies in the beholder, says Sara. “Some people are fascinated by Cornwall’s railway history, while others would prefer to talk about the canal. My goals are to show off as much of Cornwall’s history as possible.”

Sara’s love for history started early when her parents would take her to Upper Canada Village to experience what life was like back in the 1860s. Other trips were made throughout Cornwall and the region to satisfy young Sara’s curiosity.

“I smile every time I think about my father and I driving through the shallow waters of a road that disappeared into the St. Lawrence. I would ask my father about how that road got there. He explained to me about the flooding of the Lost Villages.”

These early experiences ignited a passion for history that continued through Sara’s schooling in Cornwall. As a 12-year old, she would often visit cemeteries.

“Cemeteries are quiet and peaceful and I loved the fact that I would be walking alone, but also surrounded by people. These were my friends. I paid close attention to the older tombstones, because I felt they didn’t get as many visitors.”

While at the Cornwall Collegiate and Vocational School, Sara was given a co-op opportunity with Heritage Cornwall. The 17 year old helped clean-up the archive room and catalogue the organization’s documents.  It was looking at these books that Sara’s passion for history really took hold.

“I had loved history since childhood, but I didn’t know the history of my town. This bothered me,” recalls Sara.

Sara would soon join Heritage Cornwall and served as Secretary from 2008 until 2010. She continued to research Cornwall’s history while as a summer student and this past summer worked at the Cornwall Community Museum.

Sara has written various articles for the Seaway News and the Ontario Historical Society Bulletin and has given lectures at the University of Ottawa about Cornwall’s history.
In 2012 she was successful in having Judge James Redmond O’Reilly commemorated in the Cornwall Courthouse. The Judge holds a special place in her heart and she has adopted his name on Facebook.

Judge O’Reilly served as county Judge for Cornwall from 1900 to 1929. On April 23rd 1929, while opening his court session, he had an asthma attack which would take his life.

“I have had horrible asthma since I was ten,” says Sara. “Once I found out his story, I was completely shocked to see that there was nothing to commemorate his twenty-nine years of service to our community. This led me on a 4 year journey, researching his life.”

Many people have suggested that Sara should share her knowledge of Cornwall’s history by writing her own book. She played a small role in helping her mentor Thom Racine write and publish a book about another colourful figure from Cornwall’s past, Constable Davey.

“I have been asked to write a book so often, it flatters me! I have so many ideas, and so many stories I feel need to be shared – I am too stubborn not to make that happen,” says Sara. “I will write a book one day!”

For now, however, the third-year university student has kept her focus on graduating and the book is on hold. She still is able to fuel her writing bug by putting out an article every couple of months – and continuing her research and advocacy. She is researching Cornwall’s House of Refuge and is hoping to have Judge Jacob Farrand Pringle honoured in some way.

Sara will be hosting her first lecture for the public this April 27 at the Revera Nursing Home located at 201 Eleventh Streeet East. The venue has importance – it was the site of Cornwall’s House of Refuge. Sara will be presenting a pictorial examination of ‘what Cornwall used to look like’ versus ‘what Cornwall looks like today’.

Sara has been sharing dozens of historical photos on her Facebook page sparking the memories of hundreds of Cornwall residents. In the process she has become somewhat of a local celebrity, earning the nickname of “Cornwall’s Little Historian”.

“I consider myself to be a messenger and my duty is to share as much of Cornwall’s heritage that I possibly can,” says Sara.  “Cornwall has an amazing amount of rich history, I hope I inspire others to see Cornwall in positive light, just like I do.”