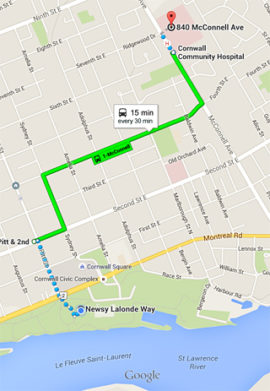 City officials have worked with the company to have the transit data included on the widely-used online mapping website.

Visitors to the website (www.Google.ca/maps) can get Cornwall Transit directions presented to them in an easy-to-read fashion by clicking on the Transit icon under the Directions tab.

The transit route information joins recreational path information that has been featured on Google Maps for some time.

Users can also search for nearby bus stops by zooming in and looking for the bus icon on specific locations of the map.

“This is an exciting development for Cornwall Transit,” said Len Tapp, Cornwall Transit Division Manager. “Having our data on a widely-used application like Google Maps will make it easier for both existing riders and potential new riders to find the route information they need.”

The partnership with Google Maps will help to raise awareness of public transit as an easy and affordable transportation option, Mr. Tapp added.

“This will put our transit information in front of a large audience and it will make it easier for people to see where our buses go and just how accessible our service is,” Mr. Tapp said.

In order to have transit data presented in Google Maps, the City had to provide information in a specific file format (known as General Transit Feed Specification, or GTFS). The work to prepare this specific type of data was originally handled by Todd Blanchette, a student doing a co-op placement with the City through the Algonquin College Geographic Information Systems (GIS) program. Denis Lalonde, the City’s GIS Applications Specialist, oversaw the work and refined the data before it was submitted and eventually accepted for inclusion in Google Maps. Participation in the Google Maps program is free.

“The transit feature of Google Maps is also available on mobile phones, so we are putting information at people’s fingertips, no matter where they are,” said Mr. Lalonde.

In addition to Google Maps, transit route information is also available on the City’s Pingstreet application, and of course, the City website.

Approximately 88 % of the population is within 300 metres of a Cornwall Transit bus stop. Transit is committed to providing an effective and efficient service to Cornwall residents.