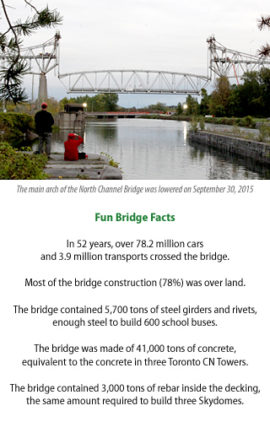 Looking Up No More – A National Symbol Vanishes

After 52 years of service, the massive North Channel Bridge is being dismantled over the heads of Cornwallites and all visitors crossing the Canada/U.S. border via the cities of Cornwall and Massena, New York. The structure is the Canadian half of the Seaway International Bridge that spans the St. Lawrence River from Cornwall, through the Akwesasne Mohawk reserve to the city of Massena.

The bridge was constructed in the late 1950s after the completion of the St. Lawrence Seaway to replace the old Roosevelt Bridge built in 1935. It opened for traffic on July 3, 1962, linking Cornwall Island and the City of Cornwall as a high-level suspension bridge 1061 metres long, crossing both the St. Lawrence River and the former Cornwall Canal.

In partnership with the United States, the St. Lawrence Seaway and Power Project of the 1950s was Canada’s—and the world’s—first billion dollar project. From 1954 to 1958, part of the megaproject was to replace the century-old canal system that bottlenecked the St. Lawrence River with a seaway that directly connected the Great Lakes to the Atlantic Ocean for overseas shipping. As easily the most recognizable structure of the Seaway, the North Channel Bridge quickly became an international symbol of the project and the friendship of two first-world nations that shared the world’s longest unprotected international border. The bridge’s post-Seaway construction created an iconic horizon for miles, one that millions have looked up to over the past half century.

The interesting history with the North Channel Bridge is that it never actually served its real purpose. The bridge was built to specifications addressing a future possibility: an all-Canadian seaway. Labelled as a “Canadian dream,” the possibility of creating an all-Canadian seaway was a viable, brass-knuckled bargaining tool Prime Minister Louis St. Laurent used in the early 1950s to convince the reluctant President Harry Truman to join the project, ultimately sharing the seaway as we do the river. As construction went forward, new American president Dwight D. Eisenhower openly shared the sentiment that Canada would be better off as the 49th state and wanted to take complete control of the International Rapids section (Cornwall to Prescott, Ontario) of the St. Lawrence River. In return, (then) External Affairs Minister Lester B. Pearson tabled a threat to build Canadian locks and its own canal in that section as well, producing an all-Canadian seaway.

Enter the high-level suspension North Channel Bridge. Although the Americans ultimately relented on their plans to control the International Rapids section of the river, the Canadian bridge was designed to accommodate overseas shipping vessels with a river clearance of over 36 metres (or 120 feet). For 52 years, the bridge stood ready for a reality that never materialized. Since the opening of the Seaway and the closing of the Cornwall Canal in 1958, all sailing vessels have used the Eisenhower and Snell Locks near Massena, and the Wiley-Dondero Ship Canal on the American side of the river. Since its opening, not one vessel ever sailed under the North Channel Bridge.

My first glimpse of the massive bridge was in the summer of 1967. My family was “from away” (in our case, Central Ontario) and relocating to the area as the Ontario Provincial Police had transferred my father there. We were scouting out the sights and the bridge was one that you didn’t (or couldn’t) miss. Approaching it from the north and around the Cornwall traffic circle on Brookdale Avenue, you would be looking up out of the backseat windows because the bridge was too large to see through the front windscreen (Thankfully, we didn’t have to wear seatbelts back then!). Once past the toll booth, windows rolled up so you couldn’t fall out, the ascent would begin. And what a rush it was—absolutely outclassing any ride on the annual midway that would arrive in town. The view? Spectacular, even with the jiggly stomach from the height.

It was a rush that never really went away through the years.

The North Channel Bridge, striking as it was on the Cornwall horizon, proved expensive to repair and maintain over the years due to its size and height. In June of 2000, the Canadian federal government announced that the book on the all-Canadian seaway was now officially closed. Both realities spelled the end of the original North Channel Bridge, and plans for its low-level replacement were underway. The new bridge construction began in 2011. On January 24th, 2014 at 7:00 a.m., the original North Channel Bridge was closed to traffic forever and its new low-level counterpart officially opened.

“The Seaway International Bridge is a key economic link between Canada and the United States,” says André Girard, V.P. Communications for the Federal Bridge Corporation Limited. “The new North Channel Bridge will improve the community and contribute to future economic growth of the region. With its advanced technology of its design and construction, the new bridge will provide the surrounding communities with a sustainable and effective Canada-United States link.”

As the old bridge comes down, feelings are mixed in the City of Cornwall.

“The high-level North Channel Bridge has stood for decades as one of our most familiar landmarks,” says Cornwall Mayor Leslie O’Shaughnessy, who was born and raised in the city. “It became a popular symbol for Cornwall, and the Seaway name has been used by many local organizations and companies in their marketing efforts.

“Watching the bridge come down is both saddening and exciting,” he adds. “It’s difficult to imagine Cornwall without the giant bridge dominating our skyline. At the same time, it represents an exciting opportunity to create a whole new entranceway to our city.”

Construction of the bridge in the early 1960s was not without its challenges or mishaps, and the same can be said in 2015. The $15 million demolition contract, awarded to American Bridge Canada, will run two years before its completion in 2016. The bridge dismantling this summer and fall has moved along with almost frightening speed but has seen its own troubles. In June of this year, two tug boats engaged in the positioning of a main barge and crane in the St. Lawrence River were overcome by the current and capsized. Fortunately, no serious injuries or deaths resulted and the boat salvage operations were completed in early August.

When the dust literally settles in 2016, what will be left of the old bridge structure? At the start of demolition, only one concrete pier in the water on the north side was to remain and have a lookout incorporated with public access. Currently, all in-water piers are set to be left intact due to cost-saving needs, but this will be revisited at demolition’s end.

Stephen Wintle, Division Manager of Infrastructure Planning for the City of Cornwall, says the reconstruction of Brookdale Avenue where the bridge once stood will open the area to redevelopment possibilities along the entire Brookdale traffic corridor.

On July 8, 2014, the Seaway International Bridge Corporation opened the closed North Channel Bridge one last time to the public. This time, you would have to cross on foot. Hundreds came from miles around to make the 90-minute trek across and back in the hot sun. The bridge people provided portable toilets and water stations at intervals across the bridge. More important, someone had thought to have sidewalk chalk stations available for anyone who wanted to live a long-held secret fantasy and write on the pavement—without being arrested or run down by traffic. I delayed my holidays to fit in my trek on the bridge when it opened. It was a once in a lifetime opportunity, and I couldn’t miss it or the pictures of that incredible view about to vanish. Walking the length, I was saddened to see all the patching in the pavement and rust in the steel girders. The bridge was a shadow of its former glory. The public, however, didn’t care. For hours, they just kept coming—coming to see and to say goodbye.

By their very nature, bridges (particularly those the size of the North Channel Bridge) are interactive sculpture designed for two different experiences: their views both from afar and from atop. Looking up, the views of and from the original bridge were breathtaking; the same views with the new, low-level replacement are non-existent. This is, of course, a nod to modern, practical concerns. However, the older generations cannot quite dismiss the impression it leaves of another replacement: that of our former 1950s optimism and “looking up” to the future with the new North American sensibilities of staying safe and low to the ground.

The dismantling continues and is now as the Seaway construction once was for the area: the best show in town. Many have spent the summer and early fall making regular visits to the site to watch the amazing demolition. The graceful lines of the North Channel Bridge commanded Cornwall’s horizon for over half a century. Even with the iconic image on many tourist items in the area, most residents eventually lost their awe of the massive structure once shared by a seven-year-old “from away.” But when the project is finished and the hole in the skyline is complete, those who lived in and around the imposing presence of the original North Channel Bridge will have to adjust to an unobstructed view.

Progress—the mantra of the Seaway—has struck again. We will be looking up no more.

But what a rush it was.

Maggie Wheeler is a writer and historian specializing in the St. Lawrence Seaway. She is the author of the Farran Mackenzie Lost Villages mysteries, and a recent contributor to Historica Canada’s The Canadian Encyclopedia.