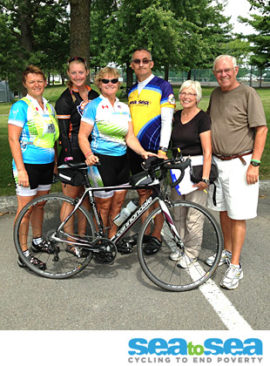 
Cornwall Ontario – The back lawn at NAV CENTRE has been turned into an impromptu campsite for 135 cyclists who are biking from coast to coast to end poverty.

The Sea to Sea cycling tour left Newport California on June 23 and is scheduled to end on August 24 on Staten Island. It will no doubt be an experience of a lifetime for the 85 cyclists who will make the entire trip, and for the dozens more who have joined the tour for shorter segments.

“We have about 135 cyclists with us now which is the largest group on the trip so far,” says Al de Kock, the tour manager. “This part of the trip has been fantastic, the Waterfront Trail is beautiful along the St. Lawrence River.”

The cyclists are arriving after completing a 108 km stage that started in Brockville earlier this morning. The tour recently crossed into Ontario in Sarnia and has been working its way east including stops in Trenton and Kingston.

The Ontario segment has proved to be less eventful than previous segments. During their journey so far, the cyclists have braved wildfires in Colorado, a heat wave in Arizona and washed out roads in New Mexico.

“This part of the trip really has been quite pleasant, and we’re thrilled with the facilities here at the NAV CENTRE,” said one cyclist.

The first Sea to Sea ride took place in 2005, with a follow up ride in 2008. A ride every 5 years seems like a good fit to organizers, who travel with the riders offering medial support, bike repairs, food and laundry services.

Despite the effort and sore muscles, it is all for a good cause, notes Tour Chaplain Jay Pruim, whose wife Bev is also the Tour Nurse.

The tour will be staying overnight in Cornwall before departing for Montreal. Cornwall and The Counties Tourism was their contact when organizers began planning the trip.

“It’s nice to see them in the City,” said Linda Wilson, Executive Director for Cornwall and The Counties Tourism. The tourism office has targeted cyclists as it works to attract visitors to the area.

About Sea to Sea

The Sea to Sea 2013 Bike Tour follows the shape and format of similar cycling projects hosted by the Christian Reformed Church in 2005 and 2008. In 2005, the tour raised almost $1 million, and in 2008, the tour raised over $2.5 million before costs and sent over $1.5 million to local, national and international agencies fighting poverty.