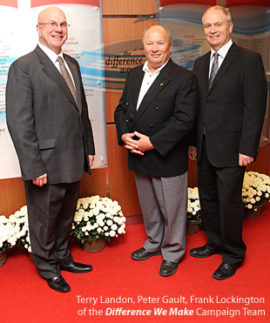 The campaign, which raised funds for capital improvements, programming and bursaries, has secured $3.6 million in donations to date, more than 80 per cent of its goal of $4.5 million.

Over 100 donors, students, faculty and community leaders gathered at the College to see the unveiling of commemorative plaques as well as to tour the revitalized campus. Over the past three years classrooms have been renovated and expanded, new chemistry, physics and paramedic labs have been added, along with a new nursing simulation lab. A complete overhaul of Moulinette Hall’s mechanical, plumbing and electrical systems also resulted in new space for student services and athletics.

New academic programming in support of the emerging supply chain and logistics sector in the Cornwall region has also been introduced with the support of donor gifts to the campaign. In addition, The Benson Automotive Training Centre was dedicated as part of the campaign.

“The campaign has received incredible support from staff, students, alumni, employers of our graduates, members of the community, and friends of the College,” said Glenn Vollebregt, President and CEO, St. Lawrence College. “As a college, our focus is student success, and the funds raised through The Difference We Make campaign will have a direct and positive impact on our students in many ways, including student bursaries and state-of-the-art learning labs and facilities.”

St. Lawrence College,  together with the St. Lawrence College Foundation, dedicated the impressive new Moulinette Hall atrium as Cornwall Place – Place Cornwall in recognition of the support received from Cornwall City Council on behalf of the citizens of Cornwall. A striking new donor wall was also unveiled.

The City of Cornwall contributed $1 million to the campaign. A portion of the City’s gift served to create 12 student bursaries for Cornwall residents studying at the College each year. The student awards are funded through an endowment for this purpose. The College’s dedication of the new Moulinette Hall atrium aims to honor the positive relationship between St. Lawrence College and the City of Cornwall and Cornwall community.

The Difference We Make was chaired by two St. Lawrence College alumni, Terry Landon, Class of ‘72 and Peter Gault, Class of ‘76. They helped lead a campaign community that was dedicated to the success of the campaign.

“The College is very grateful to the donors, volunteers, staff, and students who have contributed towards our campaign. Raising more than $3.6 million so far has helped us ensure that we have an improved learning environment and support for our current and future students,” said Don Fairweather, Cornwall Campus Dean, St. Lawrence College.

Located along the shores of the St. Lawrence River, SLC has three campuses in Brockville, Cornwall and Kingston. St. Lawrence College boasts 6,500 full-time students from Canada, and more than 40 countries worldwide. The SLC college community includes 20,000 part-time students, 1,000 staff, and more than 70,000 alumni. It also serves more than 3,000 Employment Services clients annually. The college has recently invested in the development of Applied Research and the revitalization of its campuses.

St. Lawrence College is tops in the province when it comes to key performance indicators of a graduates success in finding employment. The following are updated KPI’s for 2013.

You can find out more information on the St. Lawrence College website:

St. Lawrence College is also featured in the new edition of Cornwall Living magazine. You can order your complimentary copy by clicking here.